We spent the first week of our trip in England and as the English would say, our stay was â€œlovelyâ€, the weather sufficiently wet to last us for a while, the countryside a monotone green except for the electric yellow flowers of the rape fields.Â

The first two days we spent on a tour of straw bale buildings with our hostess Barbara Jones, who I guess you might call the main figurehead of the not for profit company Amazonails, that in England is known as an IPS â€“ Industrial Provident Society.Â Â  Iâ€™m still not sure what that means.Â  Anyhow, Amazonails is devoted to straw bale design, consulting, workshops and some construction.Â  We worked our way north from London, ultimately reaching the Lake District that is known for Beartrix Potterâ€™s efforts to preserve the land in the area.Â  One of the highlights actually took place the night before the tour when Barbara took us on a walking tour, amazing it wasnâ€™t raining, of a town named Great Dunmow, which had a beautiful collection of colored lime plastered buildings with carved motifs.Â  We managed to have the finest dining experience of our week in England at â€œThe Starr,â€ that to us Americans would be described as a charming English inn although the hostess and waitresses were French.Â

Itâ€™s kind of impossible to describe here all the straw bale buildings that we saw, they ranged everywhere from Englandâ€™s largest straw bale, the show room and offices of G.E. Sworder, fine art auctioneers to a mix of privately owned studios and public buildings.Â  I wonâ€™t describe them in detail, but here is an assortment of photos. 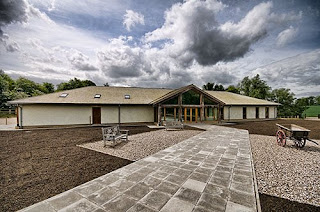 The wet weather did afford us one great discovery namely why the English Pub has achieved such notoriety.Â  Given the damp, cold weather, it is clearly the place to be and their multitude of full-bodied beers, served warm, make for the perfect beverage bordering on a meal.Â Â

Athena at the Starr Inn

After our tour we spent two days in Todmorden, slightly north of Halifax and Manchester, to teach a two-day plastering workshop inside the large warehouse-like shop building of Amazonails.Â  We basically decided on this trip that detailed planning wasnâ€™t going to work and essentially we arrived, did a survey of what materials were available, requested a few extras and jammed everything we could into that period.Â  We ended up with a fairly talented group of participants of diverse backgrounds, two interns â€“ Sarah from Denmark and Cecilia from Italy as well as local supplier of natural plaster, paint and other building products Mark Womersly of Womerslys Ltd – www.womerslys.co.ukÂ Â Â Â  He brought a sampling of his pre-mixed plaster materials and a variety of lime products that made for a much more interesting workshop. Â Bee Rowen of Amazonails delightfully coordinated the workshop, details and all.

Amazonailâ€™s projects are too diverse and numerous to expound upon in this short blog. But a few words on one of their latest projects and ideas. They are currently working up a prototype for what they call a mini-studio. The first model is 3 meters by 4 meters.Â  It will be a straw bale building complete with rough coat of plaster that will be constructed in their warehouse and moved on a trailer to its destination. Â The roof will be added once outside the warehouse. Finishing the building will happen on-site by the Amazonails crew.Â  Final price hasnâ€™t been determined, but it will be somewhere between 15 and 20 thousand pounds.

Barbara Jones and Bee Rowan – founders of Amazonails in the mini-studio.

The students participating in the workshops weâ€™re doing in Estonia, Denmark and Slovakia have received scholarships courtesy of the Grundtvig Fund of the European Union.Â  For the moment I canâ€™t tell you a whole lot about the fund except that those attending have applied under the life-long learning program that has the intention of training teachers for the common people.Â  Google isnâ€™t of much help either.

I donâ€™t know how often I will keep this up, no promises, but weâ€™ll give it a good try.