Once in a while, you get a project where everything seems to come together seamlessly.Â  Â Such was the case in Denver.Â  From the accommodations to the amount of materials we ordered, it was flawless.Â  Of course those things don’t necessarily happen by accident.Â 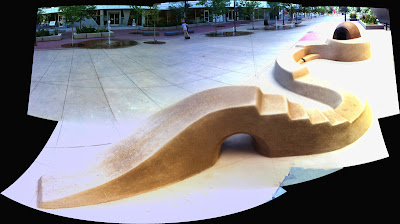 The Denver Art Museum was absolutely a fabulous place to work. Â Our two main overseers, Heather Neilsen and Emilie Lewis, were not only really good at what they do, they were fun to work with as well.Â  I donâ€™t even think Iâ€™m capable of taking care of myself as well as they took care of us. 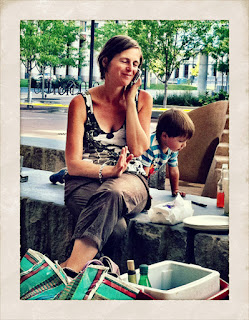 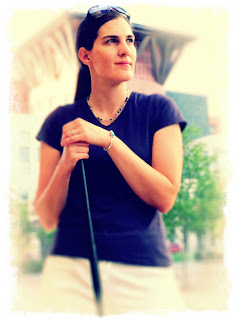 The overall design of the piece was Athenaâ€™s and I think it was brilliant and worked really well for the overall site layout.Â  I think when one has generations of pottery and curve forms in one’s background, it comes easy. Â Of course you always think of things you would have done different, but all things considered, this worked well.Â 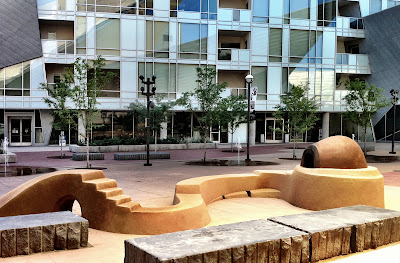 The last piece of the Clayground to come together was taking the last few wattles and braiding them together. Â There was no time to do much more than assemble them into this form, but they remain a fascinating realm to explore further.
Having Benito and Brittany there was an extra plus, not only did Benito get to work on his own individual piece and display some of his talents, I can easily say that it would not have been possible without them.Â  And last, but not least, comes Kalin, who although young and quite honestly much of the work is out of his reach, fills in admirably whenever the chance is there. 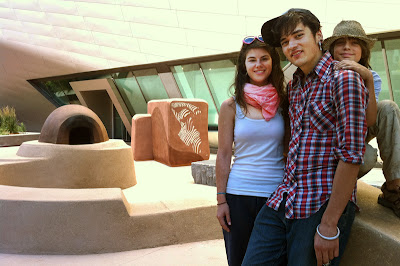 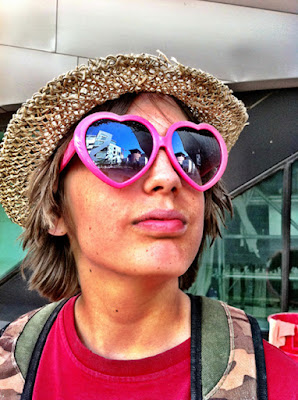 Not to be overshadowed by his older brothers, Kalin is actively pursuing his own style.
The Clayground project went faster and faster as it came to a close.Â  Itâ€™s been a week and a half now, already been to the Rio Sonora and back, I think Iâ€™m going to have to look back at photos to remember what to write.Â  Things that immediately come to mind include more kids, longer work days to finish in time, sandbags to build an arch, the oven and pizza at the very, very end.
For the moment, one very fun and nice thing was that as time went on or should I say as the project came to a close, everyoneâ€™s iPhone came out to share in the photo-taking â€“ Athena, Kalin and Benitoâ€™s girlfriend Brittany.Â  Consequently more images to choose from, different perspectives, makes it all the more fun.Â  Plus, since I flew out the morning of the day of departure, the others were there on site to capture some images while the site was totally clean. Â Just a note, all the images that have appeared on the Denver blog posts were taken and processed with the iPhone. 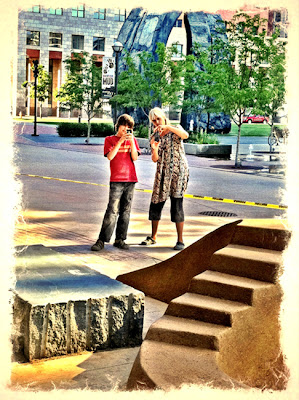 Kalin and Athena, iPhones in hand.
One regret, canâ€™t think of any others, is that the oven, which was totally functional, we could have built so that it could have been moved when the display is taken apart in the middle of September.Â  We planned the overall design so that it would last the required time and yet be easy to disassemble.Â  The oven could have been built on a pallet and taken away in one piece.Â  Next time.
Not sure, what else I need to add, the photos speak for themselves, they certainly reduce the amount of words that are needed.Â  Think Iâ€™ll throw up another quick post with some images from my Mexico trip as well in the next few days.Â  Otherwise, weâ€™re turning our head towards Europe, departure is on the 15th of August.
In addition to the main piece, we built a small straw bale wall to the side where kids and adults could try their hands at plastering a wall with clay. Â In the final phases of the project, Benito was able to use it as a pallet to display some of his clay finishing skills. 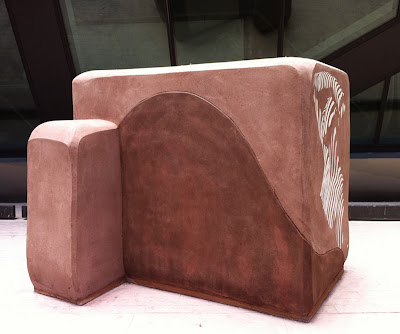 The back of the wall was finished with a polished white clay wall and a cut out section to reveal the straw below. 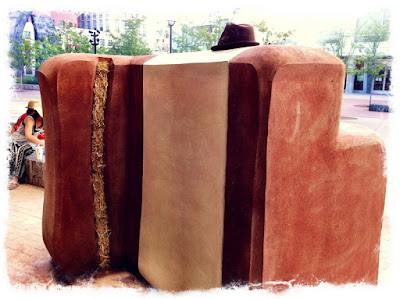 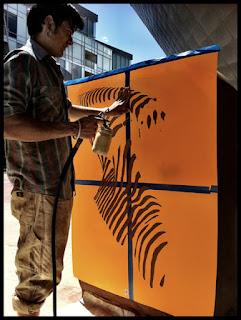 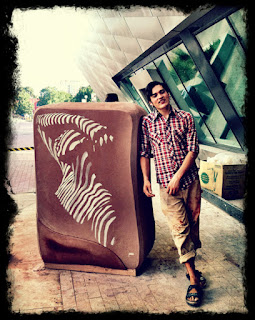 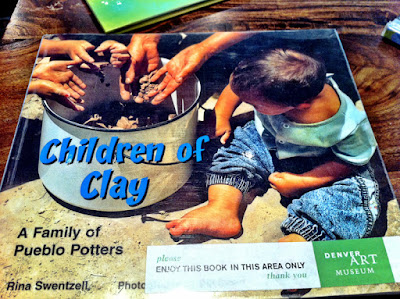 While making a couple of calls inside the museum I noticed on the table in front of me the first book we did together with Athena’s mother, a simple story about children making pueblo style pottery. Â That would be Benito sitting next to the pot on the cover. Â I hadn’t realized that it was still available and thought that it had long since disappeared from print. Â //www.amazon.com/Children-Clay-Family-Pueblo-Potters/dp/082259627X/ref=sr_1_1?ie=UTF8&qid=1312565293&sr=8-1 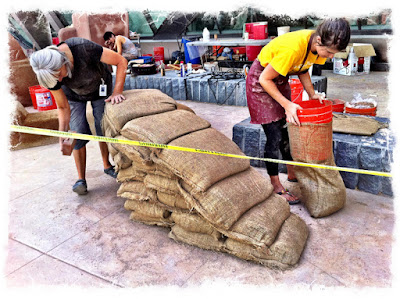 Building a stepped arch and slide from burlap bags filled with clay. 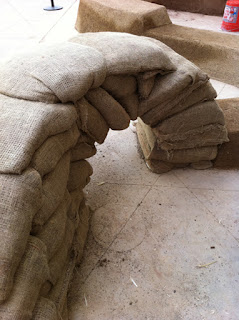 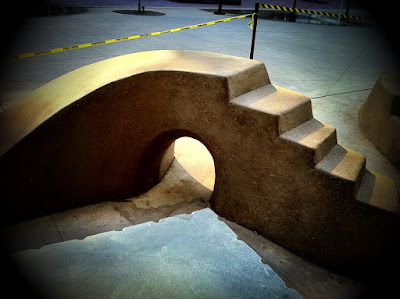 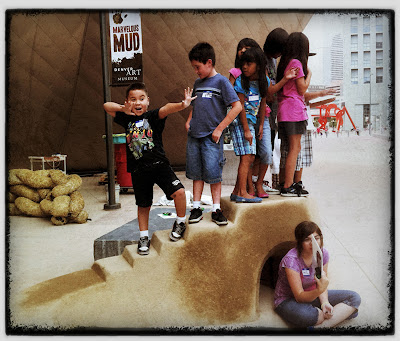 Children using it as was originally intended. 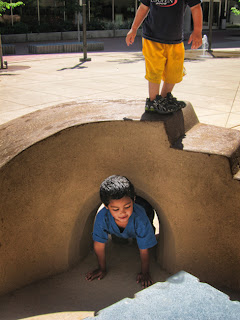 The oven evolved gradually, below it is shown with a layer of burlap that we traditionally use to reinforce the body of the oven to prevent cracking and splitting of the clay. 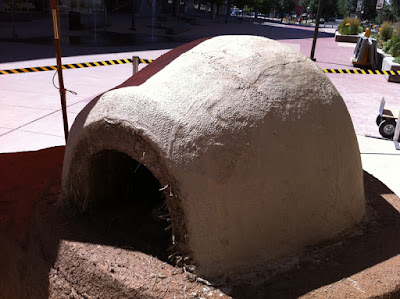 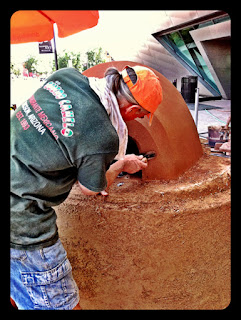 Once the burlap is in place, the oven receives the final coats of plaster. 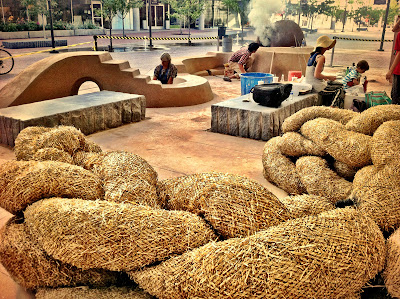 The last afternoon of our work, although not totally dry, we fired the oven to have pizza with the museum staff. Â Made me about as nervous as one could be not knowing what might happen given that the oven was far from dry, but as luck had it, it survived without the slightest glitch. 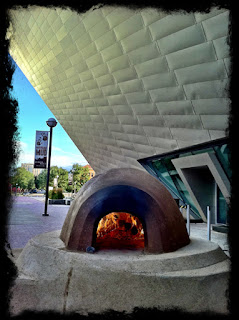 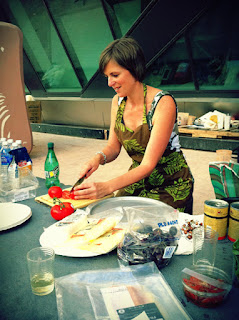 The pizzas that were created we not quite miraculous, but pretty close. Â My hesitancy due to the lack of any piece of equipment to place the pizzas in the oven, move and remove them, was overtaken by youth. Â Benito proudly displayed his skills at tossing the pizzas into the oven and using a long trowel to move them in relation to the fire and pull them out of the oven. Â Not something the heat sensitive types ought to try. Â To the right, Heather Neilsen, preparing ingredients for the pizzas. 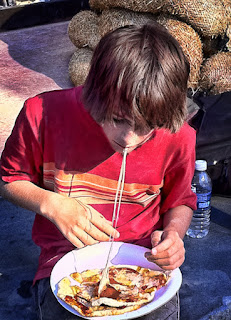 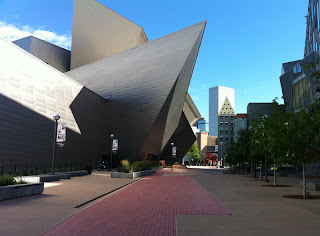 Farewell to the museum. 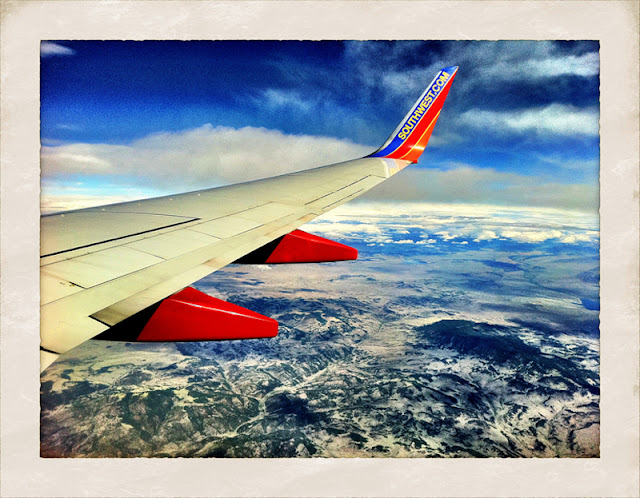