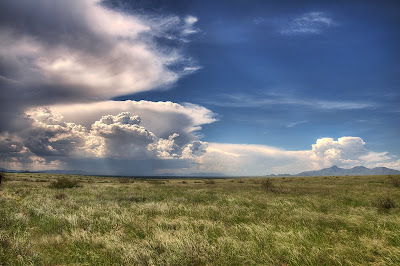 The monsoon summer of our part of the world has begun winding down, perhaps a little slower than usual. Here in Canelo, our rains began increasing in intensity throughout the month of July and are continuing up to this moment. However, this last series of rains may the swan song for this year’s monsoon that in a typical year ends with the month of August.

Speaking of August, the month simply evaporated for us, most of it in New Mexico. We made three trips to New Mexico, the first of which centered around Santa Clara feast day where Athena’s mother’s family is from. I wrote about it in an earlier post in this blog so if you want to get the general idea of what feast day is all about, scroll back a bit and you’ll find it. Last year’s version will work just as well for this year, of course the details are different, but since photos aren’t allowed, it is difficult to tell a good story.
Another trip centered on grandchildren exchange and the last trip was an extended camping adventure for the purpose of photographing the earth floor of the Laguna Pueblo Mission that dates from the late 1600s. Of course, once you are in that part of northern New Mexico, there are many things to tempt and it becomes easy to stay much longer than intended. We were able to take in Acoma Pueblo’s feast day, visit El Morro National Monument and travel to Zuni Pueblo as well. I’ll do a post on that trip apart from this one.
In the making of those trips we covered a lot of “blue highways,” back country two-lane roads, the only time we got onto the Interstate was on our way from Flagstaff to Santa Fe, but much of that we detoured our way through the Petrified Forest, the Painted Desert and portions of old Route 66 so it had a good feel as well.
The only reason I’m telling you all this is to paint the backdrop for this blog. During these trips, the landscape we witnessed while driving was every bit as good as the places we visited. As I wrote earlier in the summer, the monsoon season in this part of the world can be oh so dramatic and beautiful. This year did not disappoint. Granted, it is not a monsoon in the spirit of southeast Asia and India, but it’s more than good enough.
This year, in taking photos of the landscape, I decided to include in them the roads we traveled. When reviewing the entire collection, I thought it a fun idea to share them with you partially because I wouldn’t have to do a lot of writing. I think they give a pretty good idea of what a southeastern Arizona monsoon day might look like, only thing missing would be the lightning, thunder and the deafening downpour of the raindrops hitting the car. 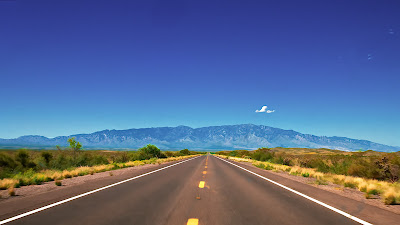 A typical monsoon day often begins with a cloudless blue sky or a whisper of cloud in the distance. This is a very typical Sky Island landscape, Mount Graham of Arizona’s Greenlee county in the distance. 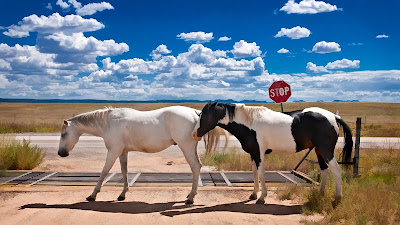 When clouds appear and scatter, that often means a day with no rain. Horses and cows frequent many of these roads, we even ran into group of Bighorn Sheep while driving through the middle of the large copper mine in Morenci, Arizona. 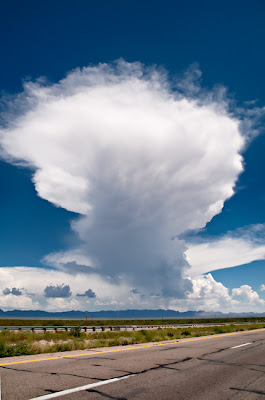 But when cumulus clouds form, towering as much as 40,000 ft, rain is usually definite. Time of this photo, 10 am. 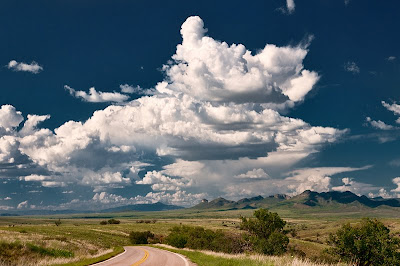 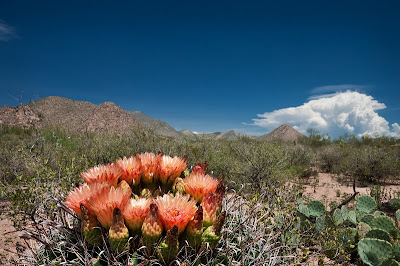 The cumulus cloud forming in the background is happening about 11 am. When these begin to form in multiple directions, thunderstorms are not far off. 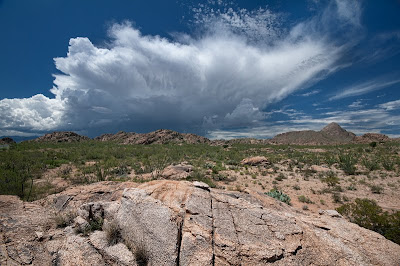 Prior to rain falling, the clouds begin to spread. 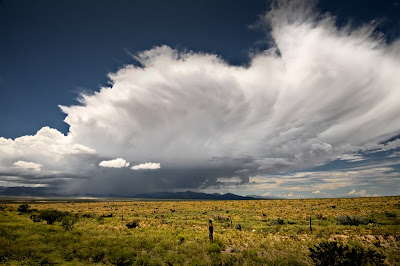 As they sweep across the landscape, pockets of rain are often seen in the distance. 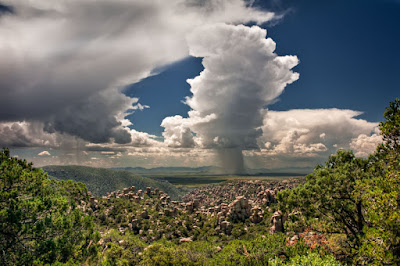 This photo taken from a top the Chiricahua mountains of the Sulphur Springs Valley marked the beginning of an afternoon series of heavy rains that lasted through the night over a widespread area. 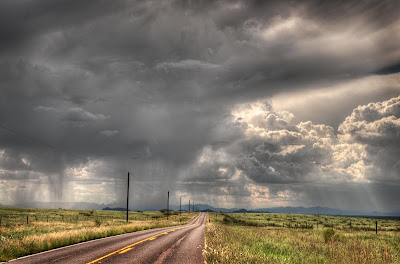 As the day develops, what were once separate clouds and storms begin to come together for heavier downpours. 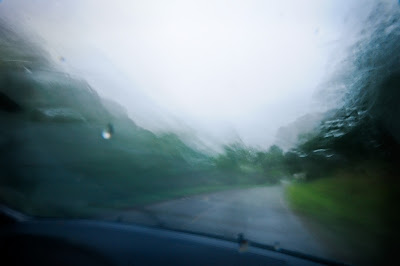 Sooner or later, one finds oneself caught in the middle of a heavy thunderstorm, the kind that renders windshield wipers obsolete, the only remedy being to pull over and wait the storm out. 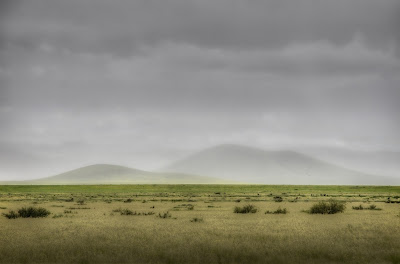 If the rain has been heavy, the landscape often softens with mist and fog as seen here in the San Bernardino Valley. 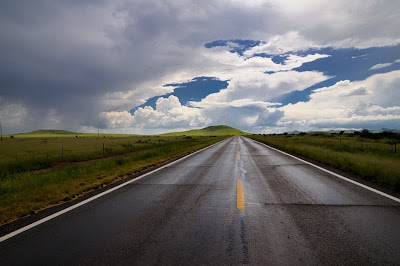 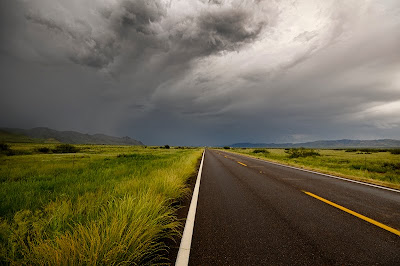 Leaving the rain behind us. 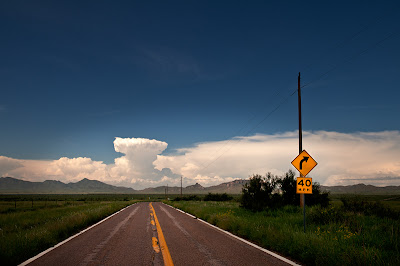 The skies typically clear after the thunderstorms have finished, but once in a while, as evening begins to set, cumulus clouds form again for another cycle of rain through the night.
I’ve got a number of great stories to add from the summer months, I’ll try to add them in the weeks ahead.