Driving from the airport to the downtown metro area of Denver, the first thing that got my attention last week was how dry the landscape appeared compared to green, lush, overgrown southeastern Arizona. Some of our grasses are shoulder-high. Most who think of Arizona, especially during the summer months, would imagine very much the opposite. In fact, the temperatures at home were a few degrees cooler.

We were in Denver this past week to meet with the staff of the Denver Art Museum. Purpose of the trip was to discuss the details of an upcoming commission received by Athenaâ€™s sister, Roxanne Swentzell, for the installation of a sculpture that will become a permanent exhibit of the museum. The piece will be called â€œMud Woman Rolls On,â€ the actual installation will take place between the months of January and September. At the end of that time period there will be a dedication. This is no ordinary clay sculpture, it includes one major figure in conjunction with three smaller ones that at its highest point will measure 10 feet and stretch out in length to 15 feet. 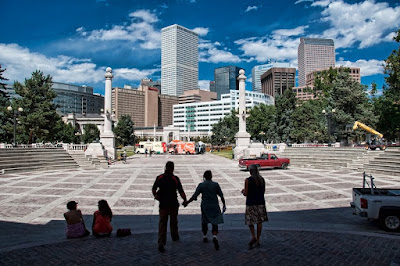 I should point out that as Iâ€™m writing about this project I donâ€™t have all the details firmly in place, so youâ€™ll have to excuse me if all the details are not totally accurate. In short, Roxanne is known for her clay and bronze sculptures and is highly regarded in the Native American art world. Typically, her pieces are much smaller, maybe a few feet in height, the largest I have seen is perhaps 4 feet with the exception of a large collection of faces mounted high on a wall in the Santa Fe Civic Center. For more of her work you can go to www.roxanneswentzell.net 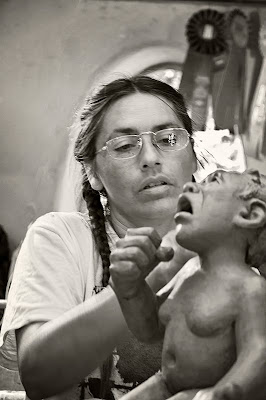 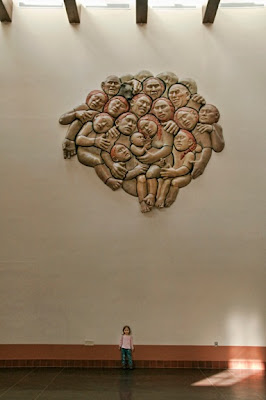 So why are we there? Roxanne invited Athena to collaborate with her on the piece so that they could work together. I canâ€™t speak for either one of them, but Iâ€™ll give you my best guess as to why. Quite simply, they are sisters and this will give them a chance to work together, thatâ€™s most of it, but in addition, since the sculpture is rather large, it is in some ways akin to the pieces we built for Athenaâ€™s aunt in Washington D.C. at the Smithsonian. And since the piece will be made from natural materials, we can take advantage of our skills learned over the years with natural building. Athena has a great eye for shape and detail and when combined with Roxanneâ€™s talent, the result should be striking. 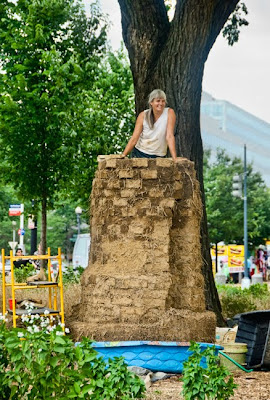 Athena in the core of clay sculpture, Smithsonian NMAI Museum.

As for me, Iâ€™m pretty sure they could do it without me, but I can be kind of handy when it comes to sourcing materials, creating needed mixes, overall logistics and on a good day, hey who knows, maybe on a good day they will let me put some of the mix on the sculpture. Also part of this team is Roxanneâ€™s husband Tim Star, who although not a clay worker, is an excellent builder and will also be on hand for coordinating many aspects of the project, at this early stage that means making sure that the base platform will be done right and planning for moving the sculpture in the future. 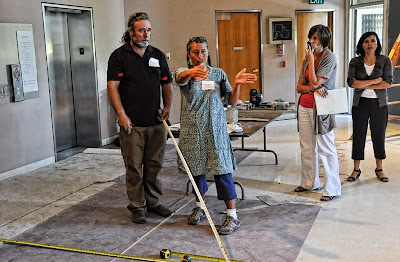 Roxanne and husband Tim Star positioning the platform for the sculpture.

This installation will be part of the museumâ€™s effort to reopen their Native American art galleries. The museum takes pride in the fact that they were the first to collect Native American works as art rather than artifacts. The gallery was originally installed in 1988 and this renovation will feature a whole new look along with artist-centric displays. Iâ€™m not sure exactly what that means, but it sounds like an effort to improve on what traditionally might be a static and dull museum approach. 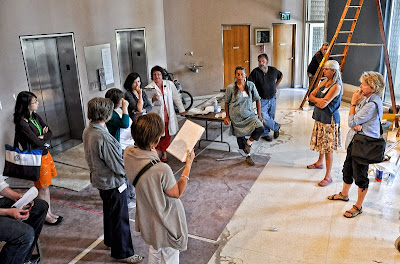 First meeting with the staff of the Denver Art Museum.

In addition to the â€œMud Womanâ€ installation, it looks like the museum will keep us busy with projects connected to its summer 2011 program that is entitled â€œExquisite Dirt – A Summer of Clay.â€ It will include a wide-ranging series of exhibitions that encompasses almost every curatorial department of the museum, while incorporating a wide range of cultures. The museum will be striving to make them â€œcutting edgeâ€ contemporary clay installations. The central idea is to highlight the almost limitless shapes, sizes, finishes, textures and colors that are possible with this versatile material. And since that is what we do, we should fit right in. Most likely, we will do a mix of events that will include educational programs for teachers, adults and children as well as some display and decorative work on walls. All that will ultimately depend upon the museum. If you want to know more, once itâ€™s defined, the museum will have the schedule. 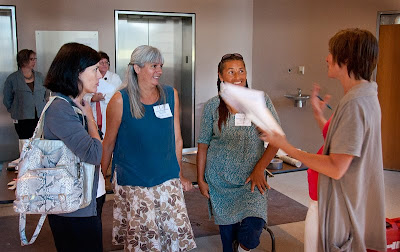 Athena and Roxanne with Heather Neilsen, educator from the museum.

The next step in this project will have us returning to Denver in November which is the time that we must deliver any organic materials to the museum so that they can be frozen for a period of two weeks to kill insects, etc. that might be present in the clay or straw that weâ€™ll be using. At the same time we will create a backdrop for the piece by applying a clay plaster to the lower 8 feet of the walls in the room where the sculpture will sit. I assume that the platform for the sculpture will be completed and in place at the same time. The location is the 3rd floor of the old museum, canâ€™t miss it as the elevators open directly to it. Work officially starts on the sculpture itself the month of January.

The logistics are clearly a challenge. Mixing and building with clay and straw can be messy work and not the ideal technology for a spotless and clean museum interior. At the Smithsonian in Washington D.C, the site of the â€œAlways Becomingâ€ project, we worked outdoors, mixing and cleanup were easy. When working indoors, as was the case last year at the Arizona State University Ceramic Research Center, even though we worked inside the building, we were able to clean tools and mixing equipment outdoors. In Denver, it will be winter during the early stages of the project with the work happening on the 3rd floor of the museum. That means storing the materials in an accessible location, transporting them to the work area, mixing on the balcony in a heated tent, doing a small amount of cleaning in an adjacent utility room and lastly taking the big stuff down to the loading dock in the basement for the remainder of the cleaning. Few things are worse than wet hands in cold weather. Fun! 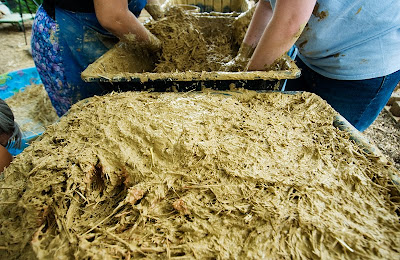 Actually, there is a fun part to all this and that is that installation/construction of the sculpture will happen live in the museum. That means people stepping off the elevator will exit directly into the ongoing work that Roxanne and Athena have told me will happen approximately one week out of every month. Most likely, there will be some opportunities for the public to be involved in the mixing and application of clay to the sculpture.

The list of materials is pretty simple and straightforward. Clay and chopped straw are the main ingredients, straw wattles that are typically used for erosion control, form the core of the structure. Parts of the head-legs-arms will be done from fired clay and then connected to the piece on site. The final group of materials that will be used for reinforcing and connecting pieces include such things as bamboo, hemp and sisal twine, jute netting and the like. 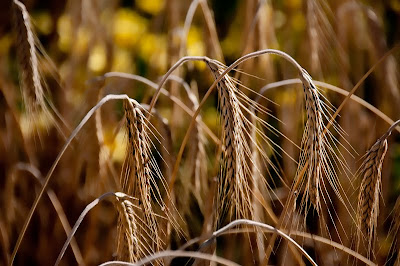 One major objective on this recent trip was to locate and confirm our source of clay and the straw wattles. Locating the wattles was easy, only one place in Denver stocks them. Locating the clay was more of a challenge, but it appears that we will be able to get it from the Lakewood Brick Factory. We had a great tour of the factory with plant manager Richard Carmichael who has been in the brick making business for over 50 years. Since part of the brick making operation involves pulverizing the clay to a fine powder, being able to use it will eliminate a great deal of screening and cleaning raw materials. The company is being extremely gracious in being willing to help us in that they will have to manually remove a few yards of it from a moving conveyor belt. In other words, it is basically a hassle for them. To them I am more than grateful. 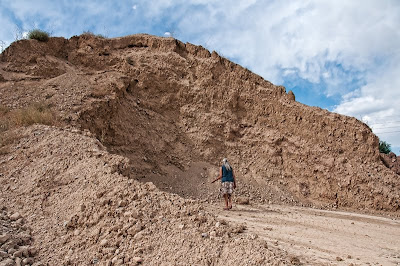 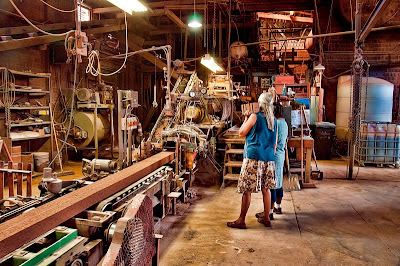 Athena and Roxanne with the clay extruder – Lakewood Brick Factory.

Just a quick note about the wattles, we chose them for a couple of reasons. In D.C., we used solid clay blocks and cob to achieve the height and dimensions we needed for the sculptures. In Denver, since we will be working on the third floor of the museum where there are weight constraints, the upper floor of the museum has a limit of x number of pounds per square foot. The weight of the piece obviously cannot exceed that and since the straw wattles are a lot lighter than solid clay, we will be using them. 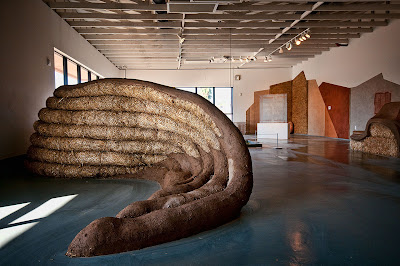 Straw wattles in our exhibit at the ASU Ceramic Research Center.

So thatâ€™s the outline, I will keep you informed as the project unfolds. For now, on behalf of Athena and Roxanne, her husband Tim and myself, itâ€™s probably more information about this project than you need. If you happen to be in Denver while we are working, please come visit us. The museumâ€™s website is: www.denverartmuseum.org

Part of traveling to any city for me is exploring the various food options. On our way to the museum there was a food fair in the park across from the state capitol. I came across a food truck and you can really only fully appreciate if you know everyday Mexican Spanish. In this case, it was the name that got me – “Pinche (peen -chay) Tacos. “Pinche” is what you could describe as the ultimate amplifier swear word that simply does not translate well. When said in a given context, you can know exactly what the meaning is. On the extreme end of things it can mean the “f” word down through other meanings such as – useless, lousy, damn, no-good, worthless, cheap, etc. Anyhow, the tacos were great, I can heartily recommend them. Want to find them when in Denver: www.pinchetacos.com 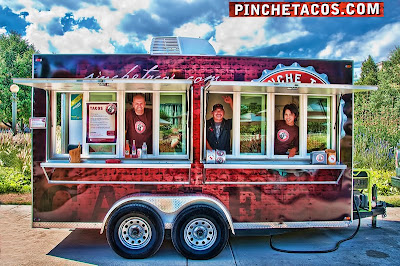 We also stopped by the Denver Botanical Gardens so that Roxanne could discuss another potential project. Currently there is an exhibit of numerous Henry Moore works scattered throughout the garden. 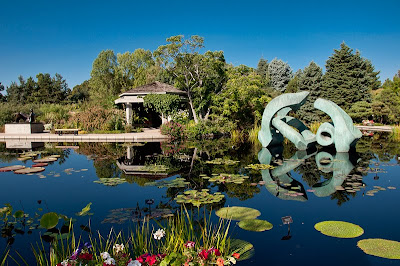