Last August, we traveled north of Santa Fe, New Mexico to Santa Clara Pueblo, one of New Mexicoâ€™s Eight Northern Pueblos, where Athenaâ€™s mother, sister, brother and other members of the extended family live. Santa Claraâ€™s annual feast day falls on August 12th so it is not that unusual to find us there that time of year, especially since our older son Benito, has begun taking part in the feast day dances. Itâ€™s a big event, people come from all over to watch the dances and eat feast day food with the different families who live there. 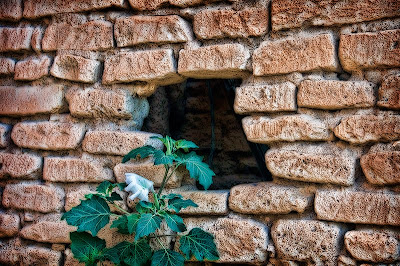 This year we had an extra project, both our sons Benito and Oso, had been helping Athenaâ€™s mother build a new adobe house for herself, we were coming for the easy part, the finish plasters. 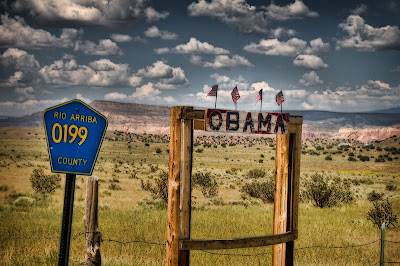 Iâ€™m a little limited when it comes to photos of feast day in that being a Native American pueblo, photos are not permitted. So I have nothing to share with you of the dances, which are quite beautiful, itâ€™s always a magical day of colors, drums, food prepared with red and green chile and afternoon thunderstorms. Instead, Iâ€™ve imagined up three different posts. 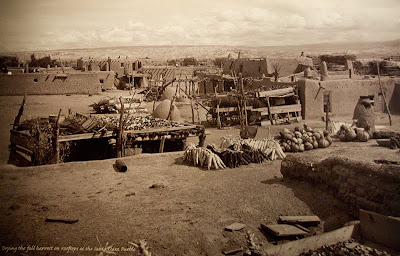 In the first I would like to describe the context â€“ northern New Mexico, give you some glimpses of the pueblo and some highlights that we encounter on our drive there. Should you wish to know more about what happens at Santa Clara feast day, you can go yourself. In the second post, I would like to tell you something about the construction of Athenaâ€™s motherâ€™s house and how it was built. Iâ€™m very proud of my two sons, they played a major role in the construction. For the last post, Iâ€™ll share with you a little about Athenaâ€™s sister, Roxanne, who creates marvelous sculptures from clay. I think youâ€™ll enjoy them all.

Our trips to northern New Mexico typically take one of two routes. Our â€œdo it all in a day routeâ€ follows Interstate 10 east, cutting over to Interstate 25 at Deming, NM. Just in case you make that trip there are a few places along the way that that might escape you so Iâ€™m going to tell you about them. 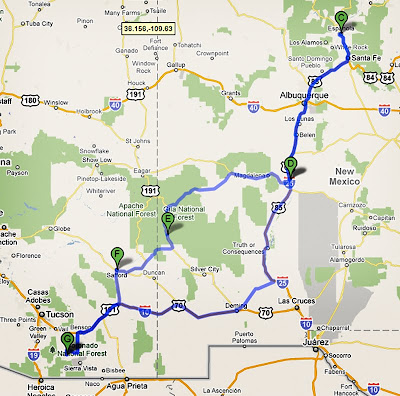 Once in while we stop in Truth or Consequences, a little town full of hot springs that are operated in conjunction with old motels and lodges, our personal favorite is the River Bend Hot Springs: Lodging and Mineral Baths – www.riverbendhotsprings.com There in this out of the way place is CafÃ© BellaLuca, competitive with the finest Italian restaurants anywhere, the owner/chef is from New York. Further along I-25 in the town of Socorro there is the Manzanares Coffee House – //www.socorrocoffee.com/, that serves good food, great espressos, homemade gelato and sorbetto. 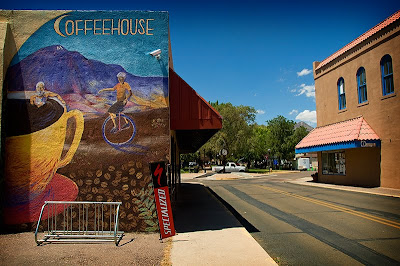 In winter, nearby Bosque del Apache is home to tens of thousands of birds, including sandhill cranes, geese and ducks. Next comes Santa Fe, we pass through it just before arriving in Espanola, famous for low riders and chile, where Santa Clara is located. 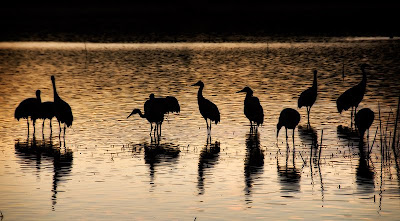 Our two-day route, the one with time to go for a hike, goes along the border of Arizona and New Mexico, often stopping the night in Glenwood, NM, that sits on the edge of the Gila Wilderness established by the naturalist Aldo Leopold. No unexpected finds here when it comes to restaurants, but great hikes are to be had, notably the Cat Walk. The walk up the canyon at Alma, just a little north of Glenwood, is also exquisite. 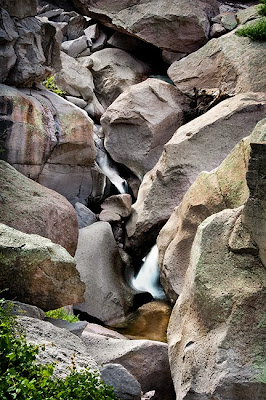 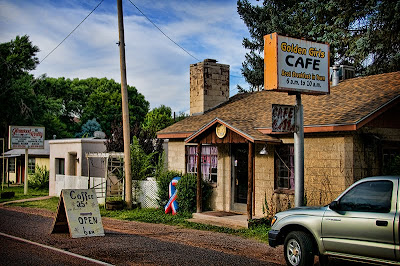 Waterfall on the Catwalk hike, cafe with 25 cent coffee in Glenwood.

OK, back to northern New Mexico, a place that has occupied a good part of my life. We traveled there as a family frequently as a child, in one of my younger incarnations, when I thought I was on the road to enlightenment, I started and ran a yoga ashram that now holds a prominent place in the community. However, it is Santa Clara that now occupies me part of every year â€“ helping at feast days, working on Athenaâ€™s familyâ€™s building projects, including Athenaâ€™s sister Roxanneâ€™s gallery. 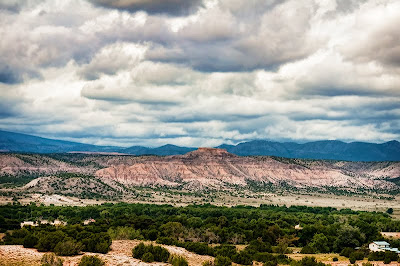 Hills and mountains of the Rio Grande Valley. 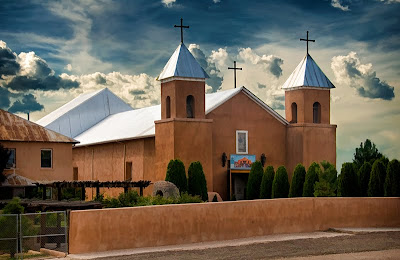 The beauty of northern New Mexicoâ€™s landscape has long captivated artists and photographers, perhaps the best known of all â€“ Georgia Oâ€™Keefe and Ansel Adams. The Sangre de Cristo and Jemez mountains define the Espanola valley through which the Rio Grande river flows. It was the lifeblood of the Tewa people built their pueblos along it. There in the middle of the valley, adjacent to Santa Clara Pueblo, sits the little town of Espanola. 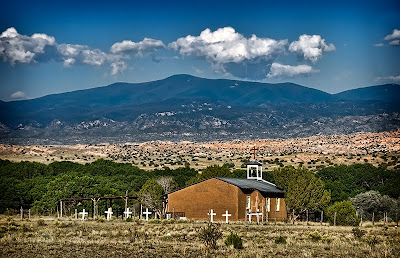 For a long time, Espanola was clearly on my list of â€œthe last places you would want to live or visit.â€ However, with the years, Iâ€™ve gained a new appreciation for it. In contrast to Santa Fe, one of the most desired places to live or visit, Espanola is most ordinary. I think itâ€™s the simplicity or rather lack of complexity that appeals. Something drastic seems to happen to a town when it becomes special, a place to be protected, the people who live there change and also begin to think they are the same kind of special. They become removed, distant, set apart, much less likely to respond with a smile or friendly face when you meet them on the street. 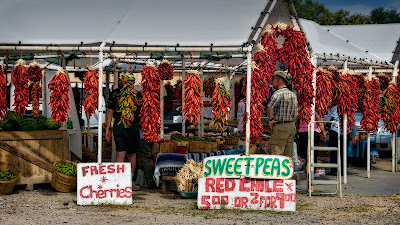 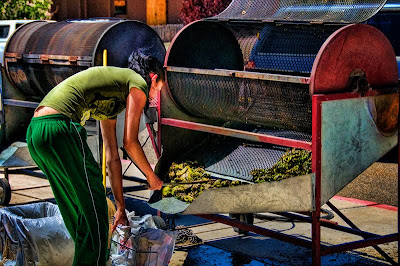 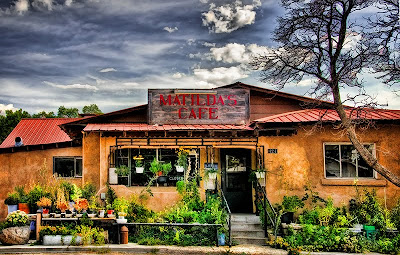 The growing Mexican population adds even more diversity to the food with small food stops as well as adding to the local cultural mix of Anglos, Spanish New Mexicans and the native Pueblo peoples. It is conveniently located for visiting the ruins of Puye, Tsankawi and other northern pueblos. Should you want to visit the Puye cliff dwellings make sure to ask for Athenaâ€™s nephew Porter as your guide. 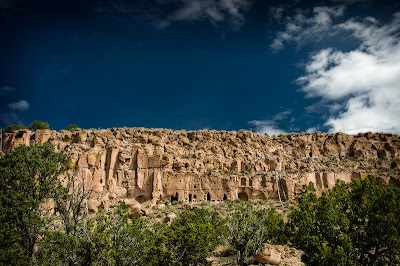 Feast day at Santa Clara means a full day of traditional dances by the four groups within the pueblo and food prepared by families within the pueblo. Partaking of the food however, means acquaintance with someoneâ€™s whose house you can visit. Iâ€™m not the one to talk more about it, that would be Athena as she has roots there. Me? I just help with the food. August 12th is the day should you care to attend, chances are youâ€™ll find us there. 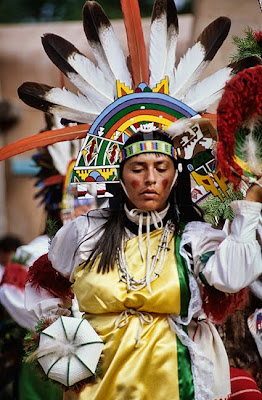 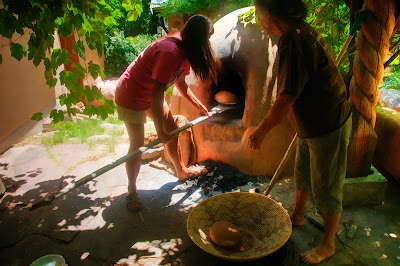 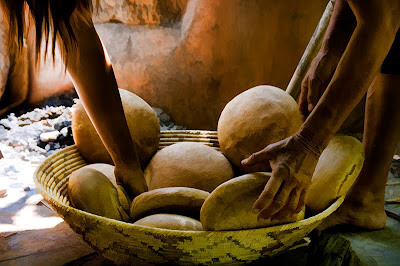 Thanks for reading; next post is the construction and plastering of Athenaâ€™s motherâ€™s home in Santa Clara. 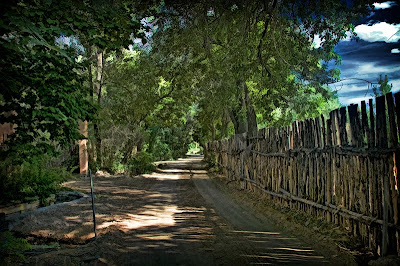 Side street in Santa Clara Pueblo.

Sunday, March 21, 2010
New Mexico / Travel 1
Prev The Rio Sonora Valley Continued
Next A Tribute to our Boys and to Family