Return to the Rio Sonora Valley

We just returned from our second trip to the Rio Sonora Valley in northern Mexico. Iâ€™ll write up a short piece on that trip soon, but for now, I thought I would share with you an account of one of the things we enjoy most about that area â€“ tacos.

Bill Harmsen, owner of La Posada del Rio Sonora, where we stay in Banamichi, Sonora, Mexico is someone who travels the world, can eat in the finest of restaurants. But in his own words, his favorite restaurant in the world is here in his hometown, Banamich, Sonora.

The restaurant to which he is referring is a small â€œtaqueria,â€ (a place that serves mostly tacos} that belongs to Martin and Irma Romero. On a small side street, itâ€™s most inconspicuous, as a tourist passing through town you would probably never find it. It has no sign, in fact it doesnâ€™t even have a name. There is no menu, Martinâ€™ only serves â€œcarne asadaâ€ (grilled meat) tacos. Thereâ€™s not even a choice between flour and corn tortillas, the house specialty are the thin delicate flour tortillas, common to the state of Sonora. I should mention that the north of Mexico, particularly Sonora, is known for its beef. The Mexican writer/philosopher Jose Vasconcelos wrote that â€œSonora is the place where civilization ends and carne asada begins.â€ 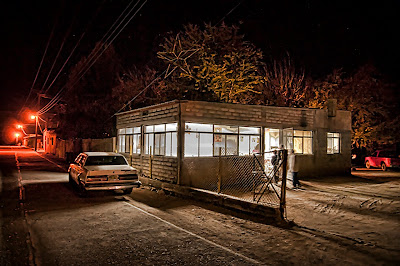 So what is it about Martinâ€™s little establishment that makes it so special to Bill? Part of it has to do with contrast. Martin and Irmaâ€™s taqueria is essentially devoid of ambiance. The interior is stark. There are a handful of religious photos/posters and assorted items hung randomly on the walls. Upon entering there is a large piece of cardboard protects the grill from air coming in the main entrance. He has no hours, he opens when it gets dark, closes when everyone has left. Music is provided only when someone pulls their car next to the door and cranks up the stereo. Itâ€™s as basic as basic can be. But the heart of this little establishment is the taco. In a place where the dÃ©cor suggests nothing resembling good food, are served some of the best tacos to be found anywhere on the planet. 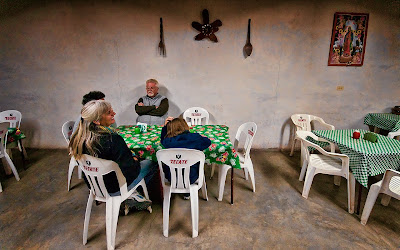 Athena and Kalin with Bill and wife Irma. 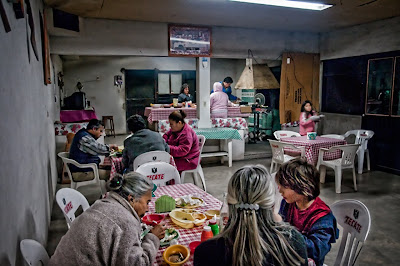 A typical taco evening with Martin.

Towards the back of the room are the grill and prep table. Martin positions himself over his chopping block, typically with a big welcoming smile. His wife, Irma, with a quieter smile, stands ready to take your order and bring a plate of the accompaniments that typically go with an order of tacos â€“ cucumbers, guacamole, radishes and salsas. The only question she asks is â€œquantosâ€ or how many. 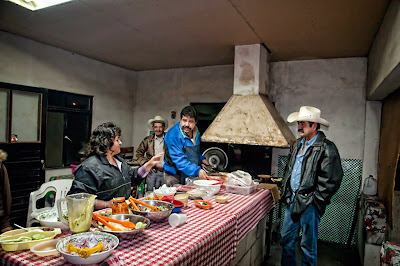 Martin, Irma and friend, whose name I never got, but with whom I had a great conversation. He’s from Banamichi, but has lived in Atlanta, GA for ten years where he runs his own taqueria called Los Laureles. Couldn’t resist teasing him about why he hadn’t learned to speak English in that time. With a big smile his response was most simple – “One or two Bud Lights and all is muy bueno, I understand perfectly.” 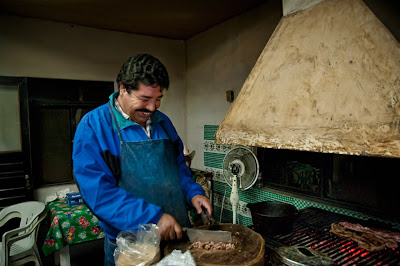 Martin over his grill and chopping block.

To understand the Sonoran taco you have to put aside any notion you might have of tacos as you have come to know them in the States or elsewhere for that matter. Iâ€™m not quite sure what makes them special, some of it has to do with the meat, the rest of it has to do with how the taco is put together.

The Sonoran â€œcarne asadaâ€ taco is built upon the thin delicate flour tortilla that is found mostly in Sonora. They are not the tough, rubbery and thick things you find at supermarkets in the States, these melt in your mouth, they are almost like pastry. Actually, most â€œtaqueriasâ€ offer corn tortillas, but not here with Martin. As is the case with most of the Rio Sonora, the preference is for tortillas made from wheat flour. 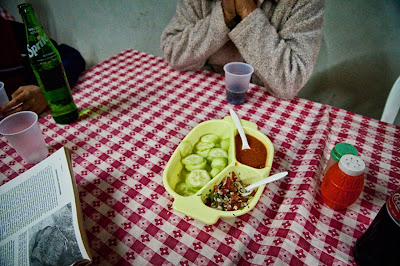 The pre-taco plate of cucumbers, often with radishes and two types of salsa.

An order of tacos begins with a tortilla laid flat on a plate and is topped with â€œcarne asadaâ€ and a sprinkling of shredded cabbage. Sonoran beef can have a distinct taste that many people claim is the result of the Sonoran desert scrub upon which the cattle graze. However, that is just the beginning, the real fun starts with the toppings. On the table there will probably be such things as purple onions soaked in Mexican lime juice, different salsas that vary depending upon where you are in Mexico, guacamole and limes. Upon our last visit, Martin and Irma had gathered fresh watercress from the local â€œacequiasâ€ (irrigation ditches). And on the Rio Sonora, there is always salsa made from the local wild chile â€“ the â€œchiltepinâ€ that is upon occasions made by combining it with â€œmembrillo,â€ the quince that is often part of local orchards. 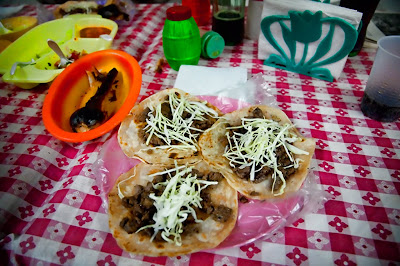 How your plate arrives. 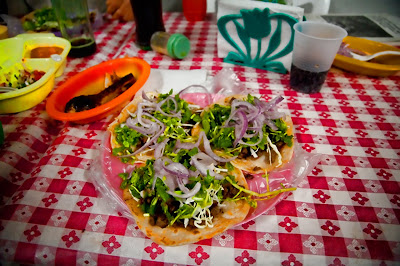 Step one with onions and watercress. 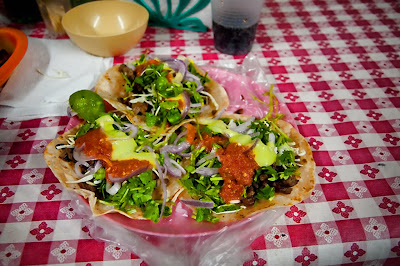 The completed taco with guacamole and chiltepin salsa.

And if you happen to have a vegetarian in the group there is no problem. Our son Kalin doesnâ€™t really like meat and so we order his tacos with refried beans that are also exquisite. In fact, all the above can be added to the bean tacos.

And with that I leave you with the suggestion that if you are ever traveling the Rio Sonora, a stop at this taqueria is a must. There is a map of the area a couple of posts back.