Last summer I got an email from friends who live in Washington D.C. and were planning to visit us over the Christmas holidays. They were told by acquaintances in the Phoenix area that they should avoid southeastern Arizona, the area where we live, because it would be too dangerous for them to travel there. And under no circumstances should they consider visiting Mexico because that was far worse. When we communicated with the people who had given that advice, they were not the least bit willing to consider another point of view, even though we live and travel in those areas.

So what Iâ€™d like to do is tell you about southeastern Arizona, the place that we live and take you back to where I left with my last post to this blog. Weâ€™ve been so busy there has not been a minute to even think about writing something. I donâ€™t think I can remember having a period of our life as busy as it has been over the last couple of months. Those two months include 4 trips to Mexico, a trip to Denver, another one next week, endless visitors including representatives from three different government agencies in Sonora, Mexico to discuss potential housing projects. Today, a group from CEDES, Sonoraâ€™s department of ecology and sustainable development are coming for a two day workshop in alternative building.

But thatâ€™s not what I want to talk about today, rather, I would like to pick up where I left off with my request for donations to buy a van/vehicle for the kids who are members of the dance group called Xunutzi, an Opata Indian word meaning â€œpeople of the corn.â€ Sometimes miracles happen or rather, things happen much faster and effortlessly than one would ever expect. I kind of thought that about now Iâ€™d be trying to come up with another good story to ask you all for whatever funds we lacked to make that happen. However, such is not the case, Iâ€™m not here today to ask you for more money, but rather to say, it already happened.

This is probably not the place to list the donors, Iâ€™ll simply say some very good friends answered my request along with someone that we donâ€™t even know, a very gracious woman who offered to make up the difference in whatever we lacked. The short of it is that we purchased the van, insurance, have money for a few repairs, luggage carrier and on top of it all, purchased a very high quality portable Bose sound system that was on sale for a great price. Money continued to come in and it now looks like we might even have enough for American visa applications for the kids that are now lacking and that canâ€™t travel in the U.S.

There is not the space to tell you how all this came together, specifically the timing of it all which made it all the more miraculous. Perhaps miraculous is not the best choice of words, but I canâ€™t think of a better substitute. If indeed there are angels, they have one or a number of them looking out for them, orchestrating the strings that need to be pulled.

Earlier this month we traveled to their area and the town of Banamichi for what was to be a late â€œposada,â€ a party or celebration that typically takes place during the nine days preceding Christmas. Their teachers were out of town so the groupâ€™s posada was postponed until January 5, day of the three kings I believe. In the 4 days preceding the event, it so happened that we located several vans in Phoenix to look at. Darrin Jones, owner of La Posada hotel and his manager, Mauro Maldonado, drove there, bought one at a great price, found the sound system next door to the car dealer and were able to drive the vehicle back to Banamichi, arriving one hour before the party. Just enough time to put the name of the group on the back windows with decals. None of this was planned, it simply happened. At the party, Athena and Cheri Jones, wrapped the keys in a tiny box, announcing to the group that we had bought them a small present. The photos below show the keys being removed from the box and disembarking after the first ride through town. 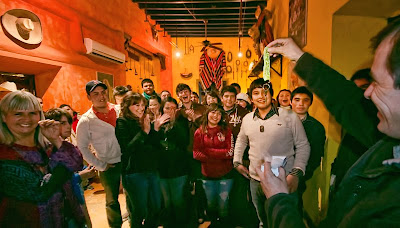 Opening the box with the keys to the van. 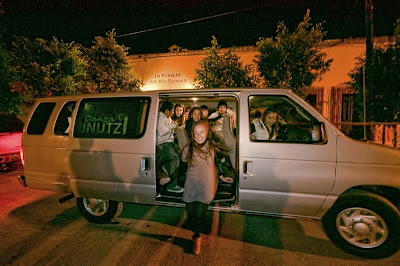 The first ride through town. 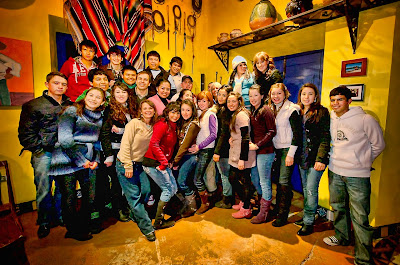 The inaugural trip for the van was this last weekend for a combination performance and group vacation in cold weather, at least colder than where they live. It was their last week free before returning to school from their winter vacations, they were off from early December until now. Fabulous vacation time to say the least. We wanted to give them an experience of southeastern Arizona hospitality and to see things they had never experienced, snow being one of them. In my mind, there was no better choice than El Coronado ranch owned by Josiah and Valer Austin in the Chiricahua mountains on Turkey Creek. The Austins have created a gracious environment that hosts people from all over the world, in particular those connected to conservation efforts along the border and in Mexico. The Austins are marvelous hosts and given the ample accommodations for guests, the kids and ourselves along with a place for the dances, there couldnâ€™t have been a better setting. In that Josiah was away, Valer stepped up as she always does and took brilliant care of everyone complete with a sit down dinner after the dances. Valer reminds me a little of the spirit embodied in Teddy Roosevelt – insightful, determined, fearless and dedicated to preserving the environment in every way possible. For the purpose of this trip, the group was kept small. Valer Austin in center.

For the evening, friends and guests came from surrounding ranches and Tucson to share in the evening. Evenings on southeastern Arizona ranches, when shared with great company, have an intangible quality that is very hard to describe, one that I find unequaled in almost any other environment, the other being similar contexts in Sonora. One gets also a very strong sense of the connections that run both ways across the border. There is a flow, rather than paralysis, one of people coming to see one another whether it be for work, friendship, families, conferences. After all the area has traditionally been one region and up until sometime, letâ€™s say the 60â€™s, for all practical purposes, there wasnâ€™t any border. Some of that still lingers on, the kids of Xunutzi, are part of keeping that alive.

I think the easiest way to describe the days that followed is through a series of photos. Weâ€™ll begin with Saturday eveningâ€™s dance performance and finish with Canelo. Before I leave this dialogue I thought Iâ€™d share a couple of thoughts I had about why Iâ€™m doing this, going to the effort to help and encourage them in every way that I can. Granted, I love their performances and the energy they bring to wherever they are, but I think I got to the root of what moves me more than anything else. They make me smile. Not that I donâ€™t smile and laugh, but their youth, enthusiasm, smiles and innocence, if you like, has been a very strong reminder of how serious and tedious life easily becomes, especially as one grows older. They remind me of what I have lost and give me cause to relax my tensions and smile like them. For that, I treasure them and I think thatâ€™s enough.

Lastly, I want to thank all those who contributed to them without knowing them or ever seeing them dance. You have no idea of how much you have done, you have helped create something very special.

In this series Iâ€™m going to withhold some of the photos of the dances and post them along with an article about the importance of the arts that was recently sent to me. Perhaps tomorrow. 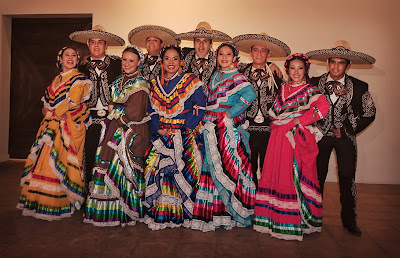 The evening dance at El Coronado. 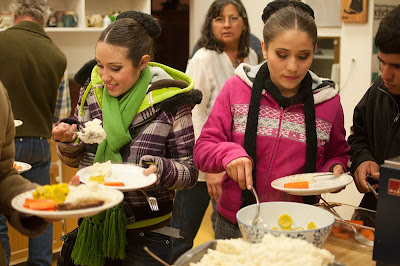 The all American ranch dinner, brisket, mashed potatoes and a few veggies. 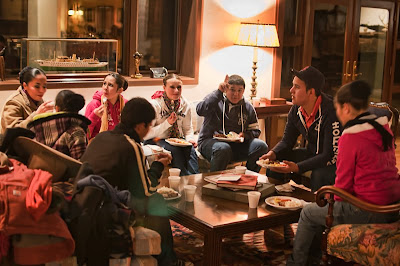 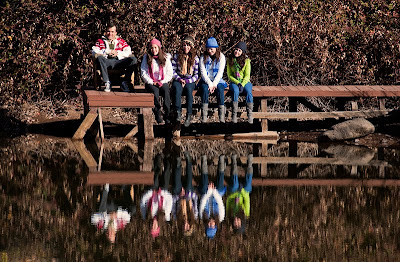 Teacher Nicolas Lizarraga with girls from the group at the El Coronado Pond. 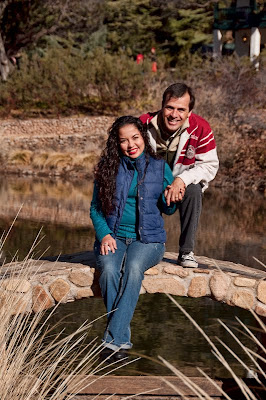 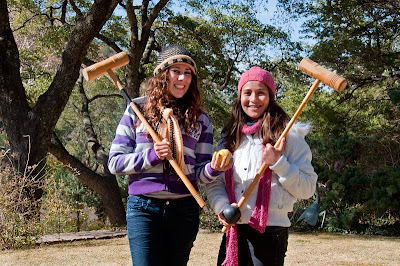 Marco Baca, whose father is known for his fine mescal Bacanora, making a discovery in the Austin wine cellar. 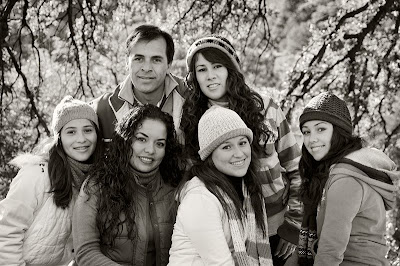 Teachers Nico, Selene along with Queren, Carolina, Alitza and Ana. 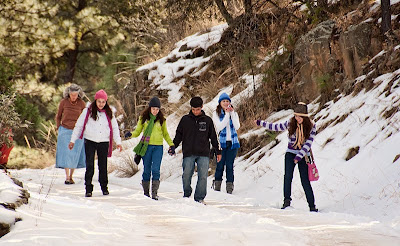 For most it was their first opportunity to experience snow at the upper end of the canyon. 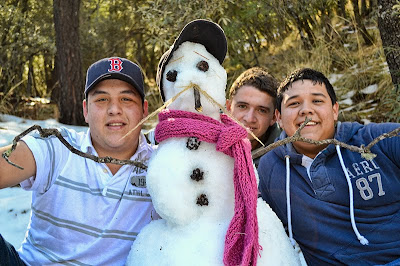 Javier, Jose Lauro and Marco with their first snow man. 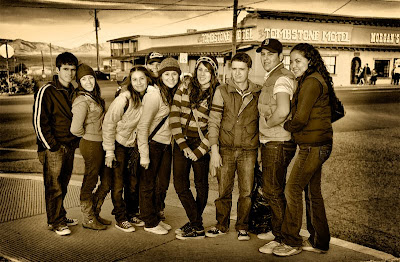 No trip to southeastern Arizona is complete without a trip to Tombstone on the way home to Canelo. 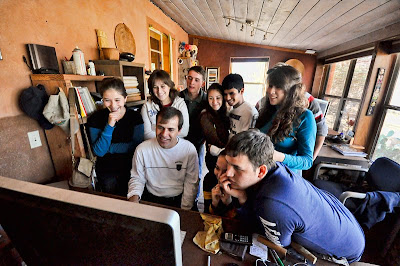 The first order of business in Canelo has typically been viewing (with much laughter) the photos from the dance performance. We did one night of pizza in the wood fired oven giving everyone a chance to make their own. Jorge (El Pequeno) and Ana. 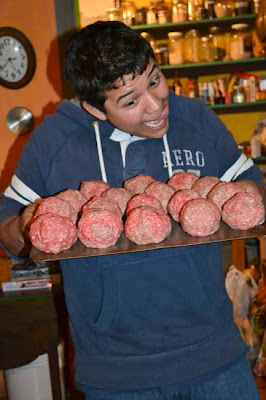 The other night – hamburgers and new chef at Canelo, Marco Baca. 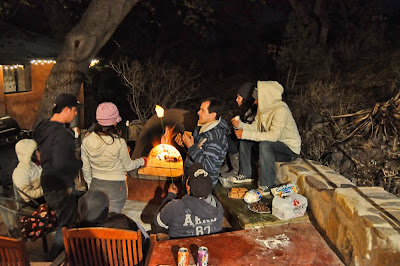 To conclude the pizza evening, they took advantage of the oven for another American experience, roasting marshmallows. 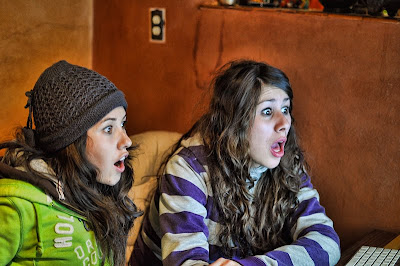 Clowning at the computer, Ana and Alitza for photo by Carolina Acosta. 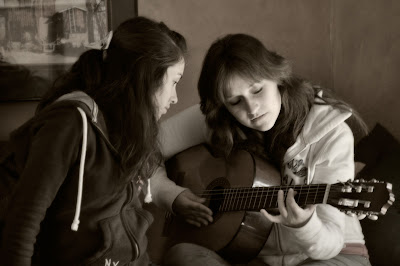 And then there are quieter moments, Ana and Carolina with the guitar. 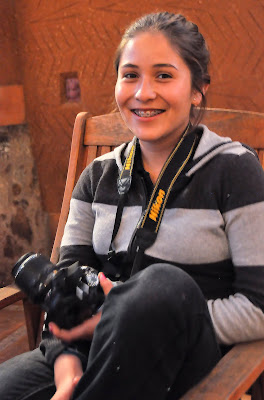 And then there is the opportunity to use the cameras for photos of each other. Queren with the Nikon. 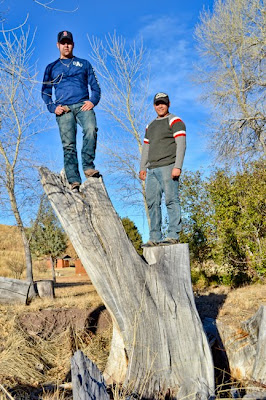 Javier and Marco on an old cottonwood stump.