Our Estonia stay began with a two day conference at the Esna Manor where a variety of people gave presentations and slideshows of their work in the Baltic States, mainly Estonia, but Latvia and Lithuania as well.Â  Weâ€™ve managed to avoid anything like this over the years where we had to sit through programs with talks all day, but in this case there was little choice as it rained for two days straight.Â  As it turned out, it was a really great opportunity to get an introduction to all types of projects happening in the region.Â  It was easy for us in that many of the presentations were in English and when needed there was a translator for the foreigners that included us as well as others from Lithuania, Latvia, France, Finland and Denmark.Â  Having English as the common language though was nothing short of marvelous.

It became obvious from the presentations that here in Europe, when it comes to straw bale buildings or I would guess any other natural building, anything containing cement is not considered.Â  Exterior finishes are either lime, earthen or earth with some type of siding/cladding. 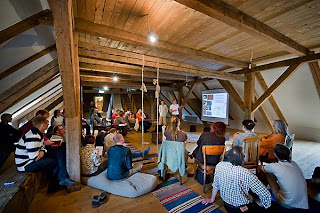 When it came time for our presentation, there was a somewhat special moment when looking out at our audience.Â  At a glance, the faces in front of us didnâ€™t look much different than what we might have seen here in the States and yet a number of different countries were represented.Â  What was really special about it was that for a few moments, through our eyes, everyone there was reduced to human beings without nationality, language differences and politics.Â  It was a marvelous experience to sit within a large group with no perception of the differences that normally divide us and to think that it might be a glimpse of the worldâ€™s destiny.Â  There also seemed to be a shared consensus that the current political and financial crisis might be in some sense a purging process that will bring people closer together.

At a superficial glance, the Estonian folks seem a little bit on the reserved side, but all it took was a slideshow of Sonora, Mexico, accompanied by norteno and cumbia music for several of them to willingly give us a number of Estonian folk songs and dance for which the country is well known.Â  One version is that they, the Finns and Bulgarians form a grouping that make them distinctly different from other European countries having come from the north and east of Asia. 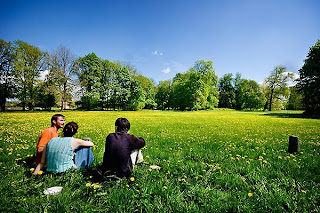 Breakfast on the Manor Lawn

Our workshop site consisted of a pair of buildings, one being the straw bale house that Sven is living in and another smaller structure where we did an earth floor.Â  The context and site immediately presented us with a handful of challenges, the first being piles of wet clay that we needed to process and clean for creating plaster and floor mixes.Â  Thankfully we manage to avoid that back home, but here we had no choice but to come up with a solution.Â  The sand was too small and fine and lastly, there was no easy way to chop and size the straw into smaller pieces for use with the plasters.Â

We turned it over to the Estonians at first trying out various mixing machines and cleaning methods, but nothing was quick and fast enough.Â  In the end, we actually found it easiest to use a pile of clay that had sat exposed to the Estonian winter and with the freezing temperatures it was broken up into enough small pieces that given a site-made Estonian tamping/smashing device we could mix them with water and screen them to the size we needed. Â A little searching produced sand that was well enough graded for various applications.Â  One thing we did discover as the week went on was that Estonia readily has available crushed limestone that traditionally is used in lime plaster mixes and proved totally satisfactory for use with clay plasters. A lawn mower and different sized screens made for a tedious, but acceptable process for chopping straw. 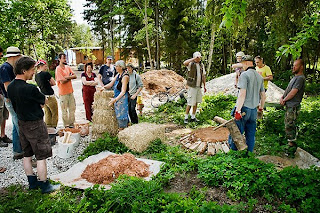 For anyone wondering, what does our nine-year old Kalin, aka Panther, do while all this is going on.Â  He managed to land a box of Legos from Athenaâ€™s friend Lyn in London that kept him pretty occupied during the conference and then he met a red headed boy his age named Eke (pr â€“ Akuh) who was the son of the cook for the workshop.Â  We dubbed him â€œRustyâ€ for the week, which seemed to suit him fine. 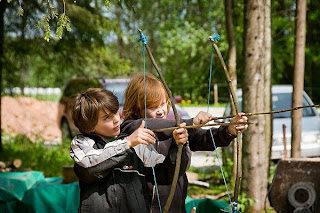 Kalin with Eke – aka Rusty

In place of straw bales, the Estonians have begun using bales made from water reeds that are typically the traditional thatching material.Â  As it turns out the people doing thatching on roofs take the small discarded pieces and turn them into bales that in appearance greatly resemble straw.Â 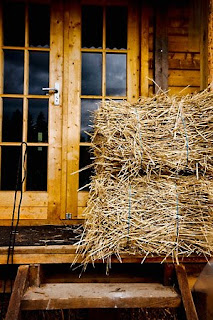 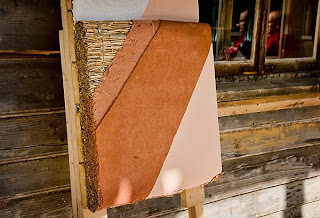 Estonia is noted for very beautiful high quality clay and lime for plastering although the focus of their work historically seems to have been lime.Â  There were two plasterers at the workshop, Kermo Jurmann and Taavi Leis (sp?) who run a company dedicated to natural building and plastering with lime and clay – www.ehituslalhendused.ee. Â They have come to rely upon an old book from Sweden on Lime plastering that has been translated into Estonian with a few adaptations and is apparently widely used throughout the country. Â The older buildings in particular give fine representations of this work.Â  The basic mix that they use in their plasters is 12% lime putty, 38% crushed limestone and 50% sand.Â  Sensibly, proportions are by weight and not volume. And like everywhere we seem to go in Europe, they are currently big fans of Morrocan Tadelakt lime plaster.Â  After I suggested that they didnâ€™t need to import low quality lime from Morroco and that they could develop their own mix they spent much of the workshop working out samples on the walls.Â  For those not in the know, â€œTadelaktâ€ is essentially lime plaster that is sealed with black olive oil soap and then burnished with a stone via techniques used in Morocco. Makes the plaster waterproof and gives a nice sheen or polish depending upon the quality of work that is done.Â 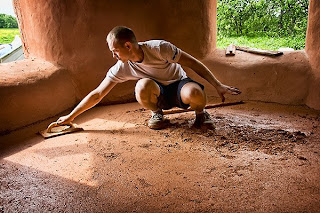 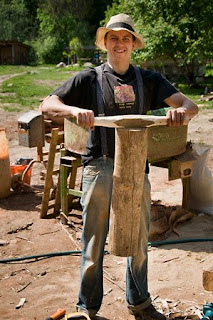 I do have to comment that wherever we have gone our hosts have been exceptionally gracious not only to ourselves, but to everyone.Â  Sven Aluste and his wife Helle were simply marvelous.Â  They went to great lengths to make sure that everyone had what they needed for the workshop and food.Â  Hella was extremely adept at sorting out who looked a little worn and in need of a touch of chocolate and her dark strong coffee.Â Â 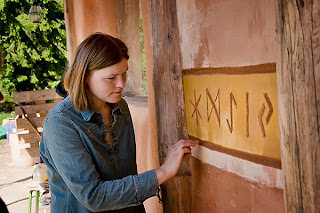 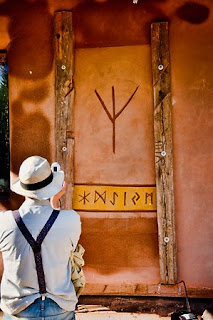 Of course, one of the highlights for us wherever we go is to experience something in the way of traditional and interesting foods.Â  One young woman in the workshop, Marita Krull â€“ an avid gardener, seemed most adept in this area and offered us such things as this slightly sweet cracker, obscure green leaf plucked from the grass beside us and a dandelion flower.Â  And then there were the spruce tree buds soaked in honey for spreading on morning breakfast rolls. 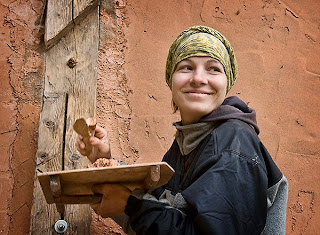 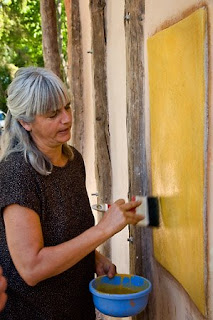