This winter has kept us busy enough to make it difficult to find the kind of leisure I enjoy when it comes to creating posts to this blog. After our project at the Ceramic Research Center in Tempe, Arizona, we spent a week in the upper Rio Sonora river valley, a little known part of northern Sonora, Mexico, photographing the small towns and people. Iâ€™ll write about that later in that we will be making repeated trips over the course of the year. In December we hosted a pair of visitors from Japan, that is the subject of my next post. After the holidays we hosted a workshop for a friend and have had visitors galore and a series of storms that dropped more rainfall and snow than we have had in many a moon. We usually can expect several snowfalls a year here at our 5,000 ft elevation in southeastern Arizona, typically not much more than an inch or two, but this time we received a generous four inches. Iâ€™m not much of a fan of ultra cold winters, never have been. Skiing and snow boarding donâ€™t hold much attraction for me. I do love the snow, but also love how quickly it vanishes, soaking the moisture into the ground. Except for pockets of snow in the shade, most was gone by late afternoon. I thought I would share a sequence of photos from that day with you.

The Mustang Mountains, east of our home. 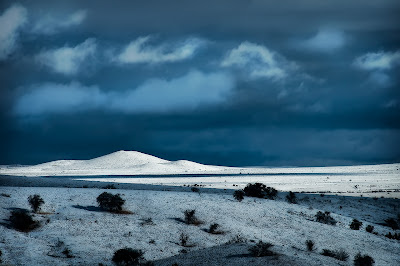 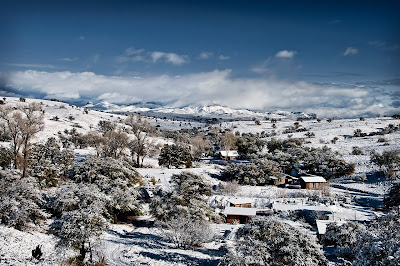 Our work buildings covered in snow. 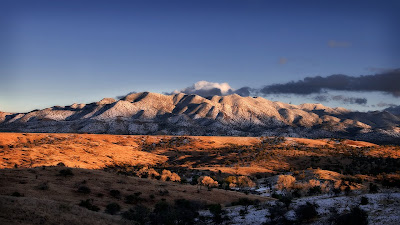 With the sun setting the same day, most of the snow has gone.

Wednesday, January 27, 2010
Canelo / Southwest 0
Prev The "How To" of Native Confluences
Next December Guests from Japan to Canelo