December Guests from Japan to Canelo 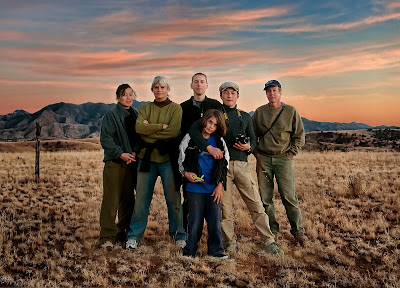 Thinking back over the past year, I thought about writing a summary of all that weâ€™ve done and for a number of reasons that didnâ€™t hold much appeal for me. My posts to this blog over the last year accomplish that so I thought why bother. In exploring my options, I started looking back over the past twenty years that Athena and I have been building together. I guess that is an accomplishment in itself in that many couples canâ€™t seem to get through one building project together. Weâ€™ve certainly had our share of disagreements and disappointments over the years, but I have to say, weâ€™re most fortunate in that weâ€™ve had a great deal of fun doing what we do and we are still enjoying what weâ€™re doing â€“ perhaps more than ever.

Our lives together have never been what you would call practical or sensible. Canâ€™t tell you how many people over the years have commented exactly that when it came to most of the things we do. There are times when I think the same, but all in all, we keep going with what seems to be increasing dedication and focus to our work, whatever that is, and to each other.

The success of our book, â€œThe Straw Bale House,â€ set us into a pattern of ongoing workshops and straw bale building projects that to this day remains a big part of what we do. At the same time, we are somewhat less known for that which we enjoying most â€“ working with clay. Our approach to straw bale has, from the beginning, been one of the marrying that material with clay in every way possible, notably with plasters, paints, furniture and floors. In essence, we are continually in the process of evolving well insulated, beautifully built clay and straw buildings. Whatâ€™s so very satisfying about that these materials is that they seem to offer an infinite pallet of possibilities. Not only is that satisfying in terms of our own learning experience, but for teaching and helping others in their efforts.

Over the years our pursuits have given us the opportunity to work with many wonderful and fascinating people, including their families. We have explored a wide variety of methods, absorbing much of it into the way we work today. It would probably be accurate to say that our major influences have been all that we learned while working in Mexico and the time weâ€™ve spent with Japanese plaster craftsmen. Interestingly enough, when it comes to methods, the two are at opposite ends of the spectrum. The Mexican is forever devising ingenious ways of making do with nothing in terms of tools and resources. The Japanese on the other hand seem to have a tool for everything as well as access to an abundance of materials and techniques. In short, both have their place and value. When it comes to our heads and hands Iâ€™m not quite sure how all that translates, but I can say that we are much more versatile and flexible in our work as a result of having been exposed to those diametrically opposed influences.

Currently our life seems to flip back and forth between those two countries in combination with the experiences we had last summer in Europe. The most recent chapter in our ongoing quest for more knowledge and skill brought to Canelo a pair of visitors from Japan. Kyle Holzhueter, a young American, currently a graduate student in Japan, is researching straw bale building in Japan. You can follow his blog at //holzhueter.blogspot.com/ He came to visit us in Canelo this last December, bringing with him a young Japanese plaster craftsman named Keisuke NODA of Noda Plaster Works è‡ªç„¶ã®å®¶è·ã¥ãã‚Šäººãƒãƒƒãƒˆ, known to us simply as Noda-san. At the same time we were joined by Tom and Satomi Lander, our good friends and Japanese trowel merchants from Kingston, New Mexico â€“ www.landerland.com

We spent a week together reviewing the basics of Japanese plastering methods, learning some new techniques with lime, Italian for that matter and for Kyle and Noda-san’s benefit, going over the basics of how we build with straw bales and clay. International events like this one are what feed us and inspire us. They bring us into contact with new friends, provide us with new learning experiences and not least by any means, new varieties of food and drink. I canâ€™t share much in terms of plaster recipes in that Noda-san requested that they not be published. That probably doesnâ€™t matter much in that the lime plaster techniques he shared had more to do with the method of application rather than ratios of materials. Here are a series of photos that capture the spirit of our week together. 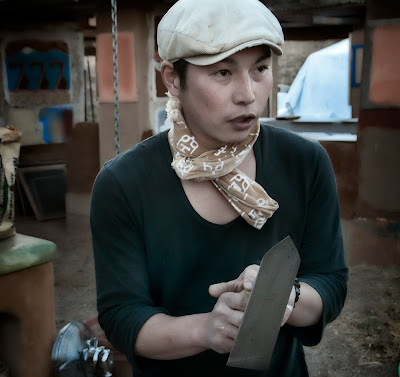 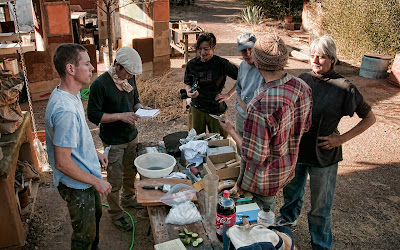 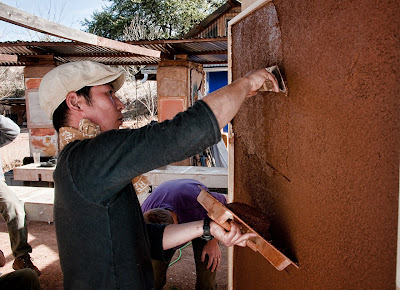 Noda-san applying a simple clay, sand and straw plaster known as the “nakanuri” coat in Japan. We set up practice boards for each of us which makes it easier to attain the type of flat wall the Japanese traditionally prefer. Having had some training in Japanese application techniques, this was like going back to school to learn more and refine what we already knew. Since most people live in an environment surrounded by flat walls, many tend to dismiss the importance the Japanese place on being able to achieve a perfectly flat wall. For us it has been a tremendous discipline and as a result I would have to say that we are much more skilled and versatile. Consequently, our ability to achieve much more interesting curved and rounded walls is also greatly improved. 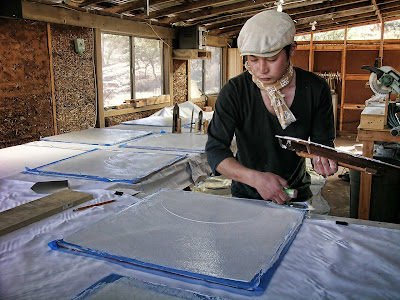 Once we had finished our review of basic plaster techniques, we moved on to Noda-san demonstrating a variety of different plasters. Two of these were based on Italian techniques taught to Noda-san by his mentor, a brilliant young Japanese plasterer named Naoki Akira. These samples were done on drywall over which a base of powdered gypsum (hot mud) 90 minute set plaster to which a small amount of tylose and silica sand was added. The idea was to get a perfectly flat and smooth base. After that a lime plaster coat was applied. A very small amount of sand was added to this that ranged in size from .25 to .6 mm. The sand by weight would have been about 10 percent of the lime. Again, a small amount of methylcellulose or tylose was added and then all mixed together with water that consisted of a little more than 10% glue, in this case, concrete bonder. The idea was to apply the plaster in two passes, finishing by pulling the plaster tight against the board to let the grains of sand come through. Noda-san used a cross-hatch pattern, but we also did a arced pattern that turned out very nice. This coat is important in that it determines the pattern that will show through on the finish. Of course it can be made entirely smooth for a very glossy look. 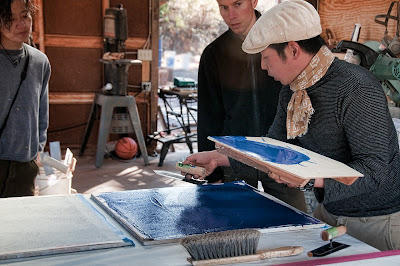 Once this is dry, the last coat is applied that consisted of lime sifted through a 1mm screen, ultramarine blue pigment, methylcellulose/tylose and water with glue. No sand in this last coat. All of these mixes were of a very soupy consistency, applied first with a flexible metal trowel and then finished with plastic trowels. At the end, olive oil is applied and then polished with a soft cloth. 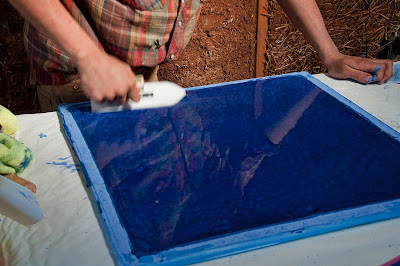 Finished plaster before the olive oil was applied. 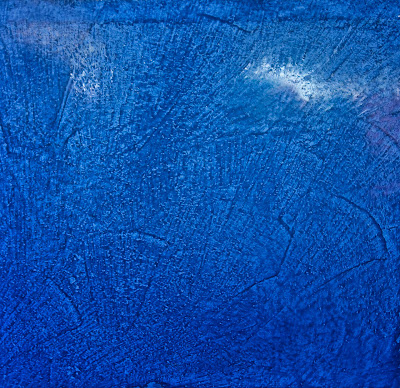 By having the sand in the base coat of lime plaster and repeating the arced pattern, the final finish had a slightly textured feel, very much like the stubble of a beard although it was highly polished. 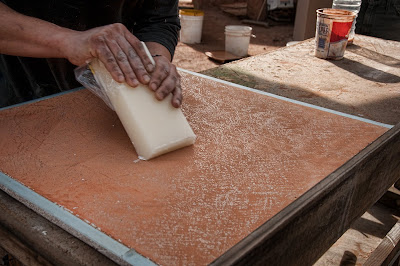 The second Italian plaster that we did repeated the same processes for the base coats that we had done with the blue plaster although the white coat was tinted an orange color. Over this, Noda-san used a block of beeswax to make little wax marks over the entire surface of the plaster. 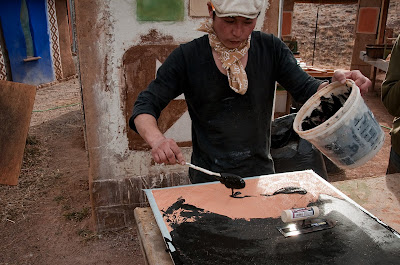 Virtually identical to the blue lime plaster mix, a lime plaster with black pigment was prepared to go over the wax and lime base coat. 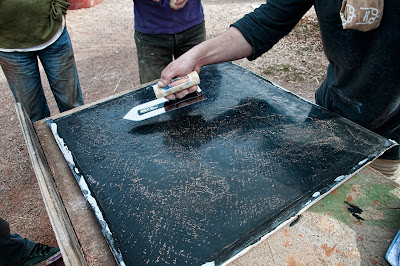 This technique resulted in a very beautiful polished black lime plaster over the textured base. 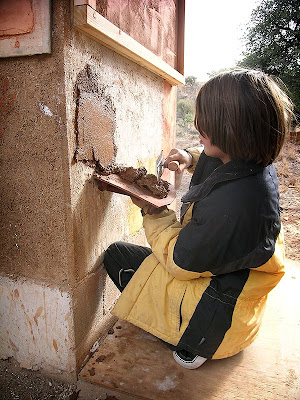 It’s very much fun to watch our children growing-up/learning and being exposed to all that comes through our doors. Here’s our 9 year old Kalin learning the “nakanuri” technique or better said, his version of it. 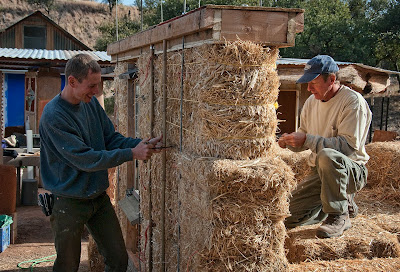 One of the things we did was to build a sample of a small straw bale wall, the way we do it, so that Kyle could take a look at how we’ve integrated straw bales and clay plasters. Here, with Tom Lander, they’re tying vertical lengths of bamboo to the bale wall. 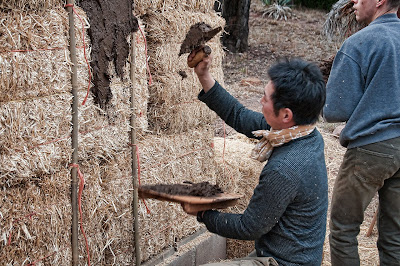 One of the things that I was curious to see was how Noda-san would apply the thick clay and straw plaster that we use on our straw bale walls. Typically, this coat we apply anywhere from an inch to an inch and a half thick. For all practical purposes it is identical to what the Japanese use as a base coat over their bamboo lath walls that they call “arakabe.” For ease we have taught our students to apply this mix using their hands and wood floats. However, the Japanese craftsmen do it with a trowel in a motion that is not unlike slapping it on the wall in vertical and downward motion with a large quantity of mix. Whenever possible we age this mix as long as we can, the mix Noda-san is applying in this photo had been aged for almost a year. The aging process makes the mix more water-resistant, stronger and more plastic. 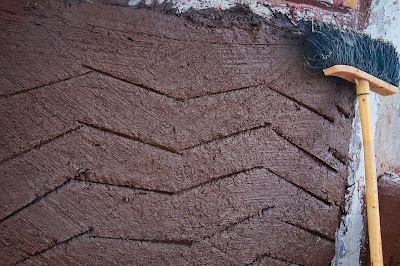 Once applied, the “arakabe” or straw/clay plaster is finished with “keys” for the next coat using a trowel and then textured with a broom. 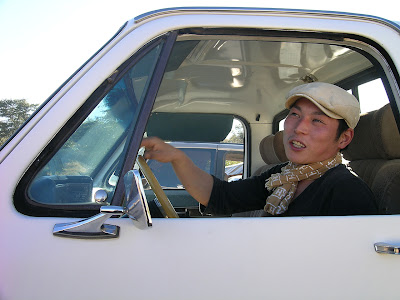 During his visit, Noda-san wanted to make sure that he got a good taste of what he considered to be American culture. His list of things to do included driving our old pickup, shooting a gun, ordering a hamburger all by himself and of course your normal sightseeing/shopping type stuff. With great enthusiasm he proved to be a first class tourist.

It was a truly a fabulous week ending with Kyle wanting to return to Canelo in the future and perhaps start a regular visitation program to Canelo with groups from Japan. Sometime in the near future, Kyle will be writing a guest piece for The Canelo Chronicles on his work and studies in Japan. Noda-san said good-bye repeatedly letting us know that he would be returning soon.