We returned to Denver yesterday to begin working with Athena’s sister Roxanne on her sculpture piece “Mud Woman Rolls On.” Our presence coincides with the opening of the Native American exhibit in the old wing of the Denver Art Museum. Gala dinner tomorrow with a public opening on Sunday from 12 to 5 pm. So if you’re in the Denver area, come see us on Sunday on the 3rd floor of the old museum.

I’m going to try something new this time, given my access to the camera on the iPhone 4, let’s see if I can post photos over the next few days without waiting until we return phone. If I get my scene together perhaps I can even upload photos and video from my phone while we’re working during the day via an app for mobile blogging.
I was going to post a drawing of what the final sculpture will look like, but I decided against it. Thought it would be more interesting if you watch the piece unfold month by month on the blog. It’s scheduled to be completed by the early part of September. With that I’ll keep the dialogue to the minimum and rely on the photos.
Today’s work that you see below is using what are called straw wattles, typically used to control soil erosion, as the core of the sculpture. For us, it’s picking up on the work we did last year in the Arizona State University Ceramic Research Center. And somewhat it’s an extension of techniques we have evolved working with straw bales and clay plasters. 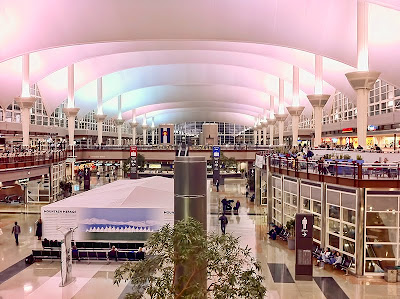 Arriving the Denver Airport with its tent-like roof. 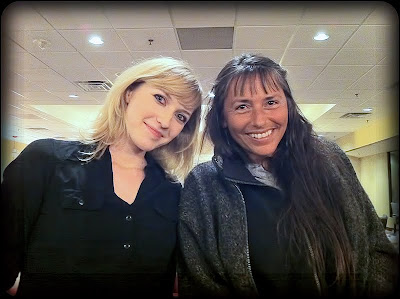 Roxanne became fascinated with our waitress at the hotel restaurant, told her how beautiful she was and that led to a photo. Lisa, from St Petersburg, Russia, had come to Denver to explore the United States. After an extended stay, she’s ready to go back home, describing it as a beautiful city full or art and culture. 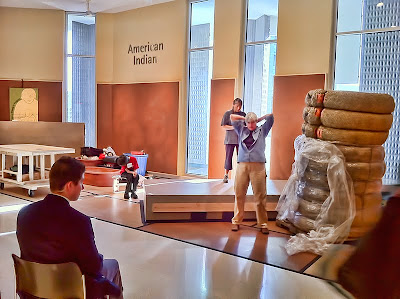 We began our day with a platform to support the sculpture and a stack of the straw wattles. 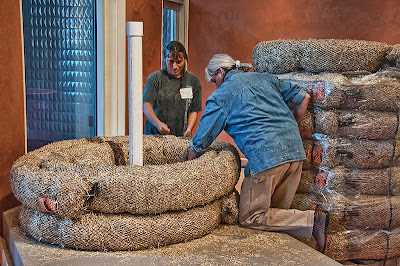 The first coil was attached to the sculpture base, the second tied to it with twine. 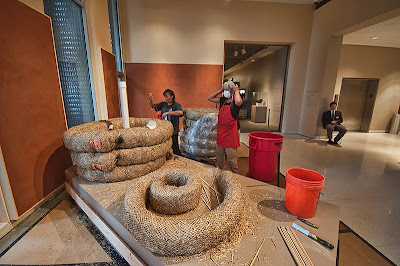 Sewing the coils continued along with staking them together with sharpened wood dowels. 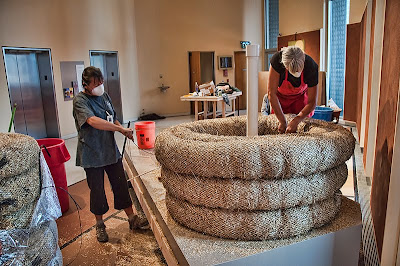 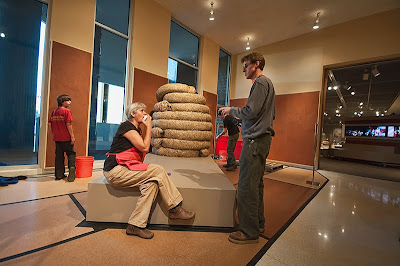 The end of the day, 7 to 8 layers of wattles. More tomorrow.