Our Workshop in France

For the sake of ease and recent memory, Iâ€™m going to leave our travels through Germany and Slovakia for later, instead Iâ€™d like to talk about France. It was our last workshop and therefore it is still very fresh in our minds.

The workshop in France took place at the straw bale home of Coralie and Andreâ€™ de Bouter, in the village of Champmillon, France. The nearest city of any size is Angouleme, the surrounding area is considered to be the cognac region. Their organization is called La Maison de Paille â€“ www.lamaisondepaille.com They teach workshops on an ongoing basis and have translated our book â€œSmall Straw Baleâ€ into French and currently working on a French translation of Bruce Kingâ€™s book “Design of Straw Bale Buildings.” With the intent of developing a teaching center for natural building workshops, they recently acquired a complex of old stone buildings that are just across the street from their home. Our workshop took place both there and at their home. 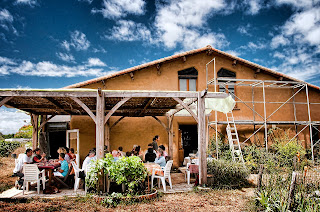 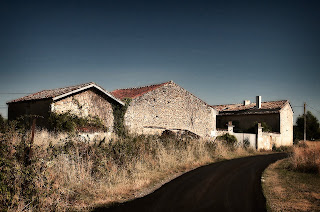 We spent more time in France than anywhere else and therefore had the opportunity to spend some very enjoyable time with them and their children. They picked us up in Venice and then drove us across the Alps to their home in France. Their two children Antonin and Rumi, although a little younger than Kalin, proved to be good companions for him. 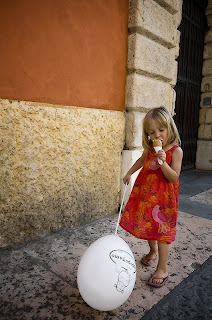 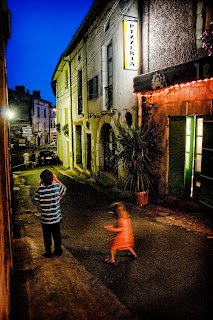 Rumi and Kalin after pizza.

I would begin by saying that the French workshop was very different than all our other European workshops. Unlike the other workshops, the one in France was the only one not organized under the Grundtvig Fund that had required the other workshops to include a mix of participants from different European countries. In France we had only French participants, except for three Belgians, who for all practical purposes were French. Very few participants spoke English so this was the only workshop that we did with the assistance of a translator. I think we found it fun to experience a workshop with only participants from the hosting country. It proved to be a good balance to the other mixed workshops. In retrospect, both were good and we wouldn’t have traded either format.

When it came to food, the French breakfast had nothing resembling dark rye bread, cucumbers and sausage. In their place we found wheat breads, croissants, butter, cheese and jam. And as you might suspect, wine took on much more importance than the other countries. It would not be an exaggeration to suggest that somewhere back in time the French got water and wine confused. That is, in terms of which one youâ€™re supposed to drink the most. Or it might be something very practical, Coralieâ€™s father remarked that you should drink wine because water makes you rust. 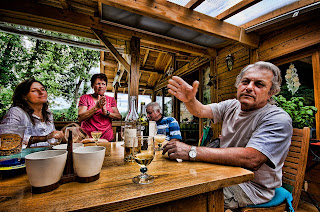 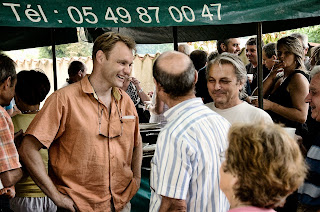 Prior to France all our workshop food had been quite good, but Coralie and Andre took it to a new level. Our cook for the workshop was Evelyne Thibault whose food might be described as modern, lean and healthy French cuisine. Just imagine everything you associate with French cooking and then imagine it to be healthy and non-fattening. When it came to the evening meal, dinner typically happened around 9 with ample supply of wine and beer brought by the participants, several of whom were most proud of their beer, notably the Belgians who snubbed everything else. No one seemed to have the slightest interest in evening programs or slideshows. 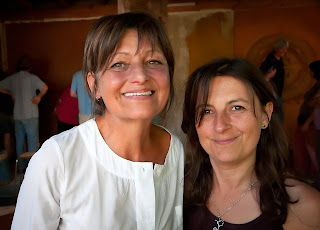 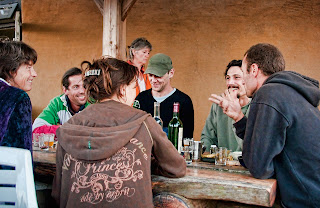 From our perspective the workshop went well. There was some rain, but only at what I would call the right times. For the most part, the weather was ideal. unlike Slovakia where daily heavy rain was the norm. The language barrier made it a little slow to get started, but there came a point when we seemed to develop a rhythm that allowed things to flow smoothly. One interesting fact we discovered as the week progressed was that a number of our new French friends, who knew no English at the beginning of the week, magically began to speak a fair amount of it. There were several participants who were a great help to us with the language translation, Sarah who appears to be an English woman who got lost in France some years ago, Marie Pascal who looks like she landed on the last Viking vessel and our friend Susan, an American beekeeper, whose husband is French and who had previously attended a workshop in Canelo. All capable of good English, we relied on them heavily throughout the week. 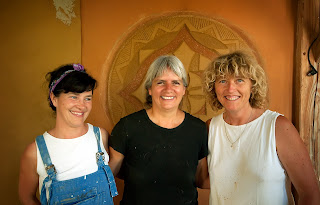 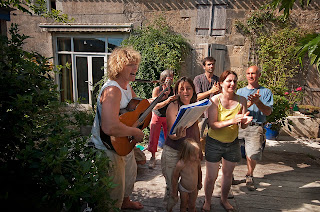 We worked at both Andreâ€™ and Coralieâ€™s home as well as their newly acquired buildings which for now weâ€™ll refer to as Chez Dominique. If anything, Andreâ€™ was over-prepared for the workshop. He had enough sand and clay to last a lifetime. Andreâ€™ bought bagged white kaolin clay in an effort to eliminate the need to sift and clean the clay. He also had an ample amount of chopped straw on hand that we use in plaster mixes. For the first few days we had some difficulties with the different materials, but rather than go into it here, Iâ€™ve included a section at the bottom of this post that deals with the technical side of the different mixes we made. 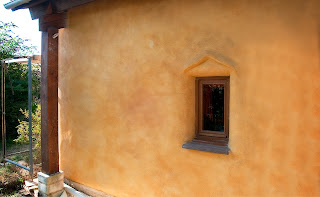 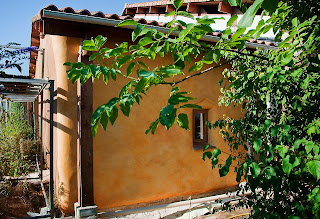 Something very different about this workshop was that we had a workshop within our workshop. We had the pleasure of working with two Moroccan masons who were there to do a â€œtadelaktâ€ floor. For those not familiar with the term, â€œtadelaktâ€ refers to a technique where lime plaster is burnished with a stone and then sealed with black olive oil soap. We have had limited exposure to â€œtadelaktâ€ in the past, but this was a special opportunity to work firsthand with these two men. It was ideal for us in that it added another floor method to both earth and Japanese â€œtatakiâ€ floors that we currently do. I will write an account of how this floor was done in a separate post. 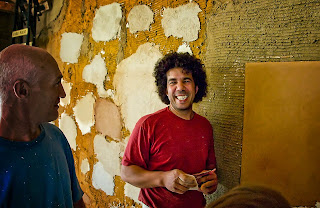 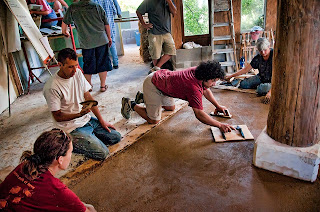 Mustapha trying his hand at an earth floor.

Like our other workshops, we also did an earthen floor and a sample of the Japanese â€œtatakiâ€ floor. Athena added another great carving and in response to a request by Coralie, this one was done in the shape of a mandala. Typically, the carvings that she does are combinations of clay and lime plasters, but for ease and the time constraints of the workshops, the Europe carvings have been only clay. 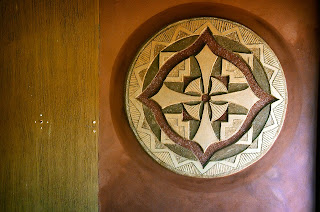 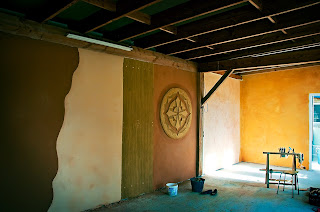 Plaster samples from the workshop.

Plaster Notes: if you are not interested in the technical aspects of mixing clay plaster skip this section. To begin, letâ€™s talk about the straw. I think it would be accurate to say that we use more straw in our plaster mixes than most Europeans. From what we saw, they use much more sand. Our plastering methods have their roots in the work we did in Mexico and our experience with Japanese plasterers and that would account for some of the difference. As they say in Mexico, an adobe without straw is like a person without a soul. Anyhow, for thick applications of plaster we rely on our straw/clay plaster mix in which we typically use pieces of straw that average somewhere between 1 and 3 inches. For that type of work, the chopped straw that Andreâ€™ had on hand was perfect. However, for thinner coats that are usually Â½ inch to 5/8 inch (12-15 mm) thick we rely on chopped straw that averages Â¾ to 1 inch (18-30 mm). This length is always difficult to acquire no matter where we go. We solved that problem in Slovakia and Denmark by purchasing straw that was already chopped and bagged, however, in the long term this would not be practical in that it would get expensive. At home we use an Echo Bearcat chipper shredder that has 3 interchangeable screens that produce a variety of sizes. When we are on the road in the States, we typically rent a chipper shredder from a tool rental outlet and within an hour or two we can usually produce all we need. It would take some further research and discussion to figure out what would be a practical solution in Europe if the folks there decide to continue with the types of plasters we did there.

The bagged white kaolin clay proved to be somewhat problematic. To put it in plain language, kaolin clay is one of those clays that you might describe as being â€œtoo well behaved.â€ What I mean by that is that when mixed with water, kaolin clay doesnâ€™t expand a great deal nor shrink excessively when drying. Therefore it is not very susceptible to cracking. On the negative side, it is not very plastic, workable or strong. It lacks some of the desirable qualities one would like to have in a clay that is used for plaster. Consequently, we struggled for a day figuring out how to work with it. To give us a little more flexibility we decided to process some brown clay that Andreâ€™ had soaking on site. With that addition we had what we needed. On the other hand the kaolin clay did work quite well when mixed with lime for a lime/clay plaster and as many people know, it works well for thin finish coats and paint.

In that many of the mixes we used in France followed the same basic pattern as the mixes in Denmark, I donâ€™t think Iâ€™ll go into them here. If you have any questions about them you can email me and Iâ€™ll be happy to respond.

Having gained some knowledge of what is available in Europe, both in terms of tools and materials, there are several things I would request in the future should we work there again. The first thing would be to find a way of producing chopped straw in the Â¾ to 1 inch range. We typically need smaller sized straw, but it can usually be created by using screens or sieves. The same sieves can be used for both sand and clay soils as well. A good selection of sieves would be essential. The most important one would be one large sieve that is in the 1/8 inch (4 to 5mm) range for processing bulk clay and sand. A selection of smaller sizes would also be useful â€“ 1 mm, 2 mm, 3 mm along with one in the Â¼ inch (6 mm) range. A very fine sieve, perhaps something around 40 to 60 mesh would be great for finer plasters. Given the above, we could do just about any type of plaster work. 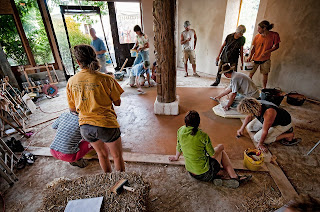 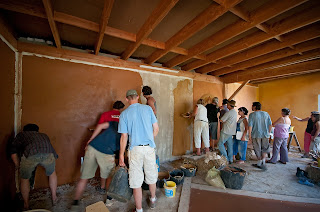 Before France, we did not have to work on any sheetrock walls. This time they were the major part of the wall surfaces we had available. Plastering on drywall is a subject in its own right. I think what Iâ€™ll do is add a piece to my final France post rather than attach it here. Iâ€™m planning one more post on France that takes a look at some of the other things that we did while there.