While in France we had a few days before and after the workshop and I thought I would share some images with you from places that we visited. France seemed to have a certain magic for making light, mood and place come together for an irresistible photograph. However, none of that mattered unless there was an opportunity to stop the car easily and to make a photograph possible. One thing was for certain, none of the following images were taken by waiting for the right light and conditions, Iâ€™ve learned to simply shoot whatever is available and try to shape it later on the computer to convey a sense of what I was seeing or feeling at the time. Iâ€™ve increasingly given myself greater freedom when working with images after reading part of Ansel Adamâ€™s book on color photography where he said that he thought it was ideally suited to an approach that was more illustrative, such as that one would find in paintings. 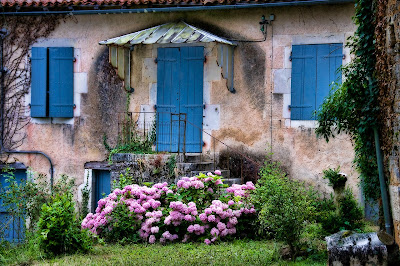 We entered France the Ubaye valley, beginning with the town of Barcelonnette, and then on to the town of Embrun to visit Richard Lacortiglia and his wife Lilian at the ecological building center Le Gabion â€“ www.legabion.org They teach a variety of workshops and are also involved in restoration work, at the moment they are working at the Abbaye de Boscodon in Embrun. After spending the afternoon with them we visited the Cathedral of Notre Dame du Real which was one of the more beautiful churches we saw on our trip. Many towns seemed to have beautifully preserved sections of their old town, Embrun was no exception. I should also mention â€œGenepyâ€ which is a beautiful â€œdigestifâ€ that one finds in the region and is made from a rare alpine Artemisia. It is truly a local product in that many residents and restaurant owners in produce their own including the famous Chartreuse monks who are well known for the liqueurs. 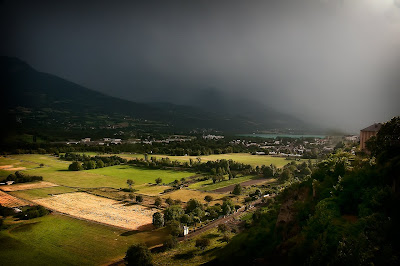 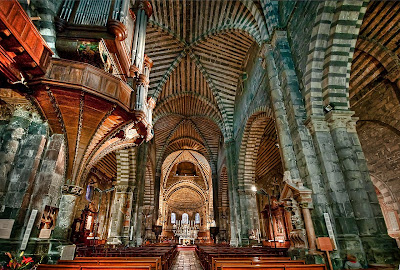 When we arrived at Andre and Coralieâ€™s home there were a couple of days to prepare for the workshop. As always, these were consumed with excursions to look for additional materials, tools, basically any last minute items that we could grab to make our work easier. It just so happened that those two days were somewhat magical. There were just enough clouds to create a beautiful diffused light and all of a sudden the landscape took on a quality that made it easy to understand what the French impressionist painters tried to convey in their works. It reminded me of Canelo in the summer during the rainy season, but softer. 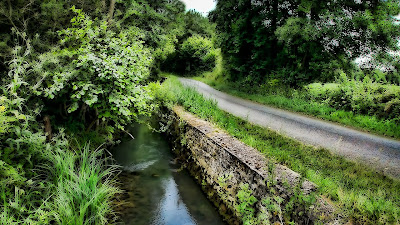 One of the first things to catch my eye was a group of young boys who were jumping off the bridge into the La Charente river, a priceless moment, the kind of thing you might have imagined seeing small town middle America, what you might call mid 20th century vintage. Canâ€™t remember how high the bridge enough, high enough to make one flinch at the thought of jumping. The river itself was something very different for me, it was much more tame, manicured and much calmer than the rivers I have come to know in the States. 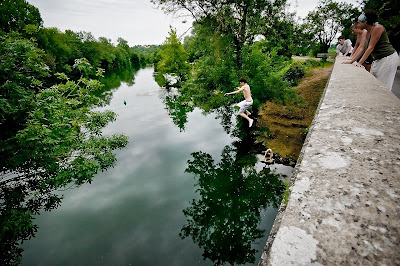 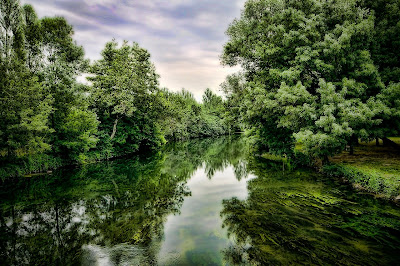 Moments like those seemed to appear unexpectedly, but frequently. The sunflower fields were nothing short of captivating when backlit in the afternoon light, sometimes it was the animals, other times what would draw my attention would be the meticulous detail and care that was put into the simplest things, the kinds of things that in our modern world get relegated to concrete and plastic. Iâ€™m going to skip using any more words and let the images speak. Itâ€™s just too hard to attempt describing them using language. Too cumbersome. 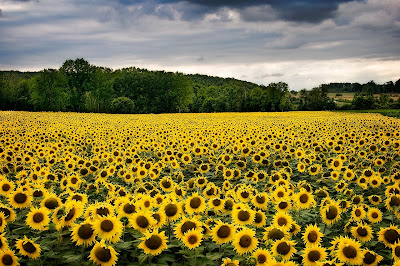 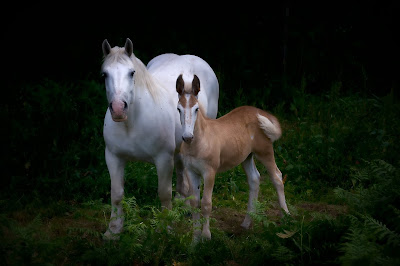 No idea what breed, but beautiful.

I will however, tell you about a beautiful couple that we met. Jean Philippe and Pascal Boulay, who from the family vineyard/farm they restored, sell bread baked from the wheat they grow, pienau and grape juice produced from their grapes, cognac, sunflower and hemp oils. Their place, their products and the two of them were nothing short of beautiful. They would be worth a post just dedicated to their work, but Iâ€™ve got to finish this Europe trip. 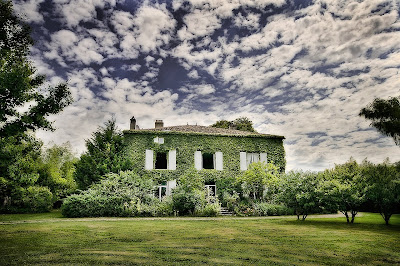 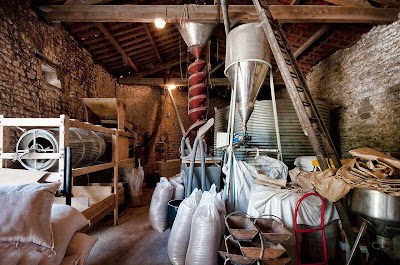 Flour mill for their bread.

After the workshop we took a trip to the region of the Dordogne river that is just east of Bordeaux. There we caught up with Thierry Soubrier and Noe Solsona, who had been with us in the Denmark workshop. Together they operate their straw bale and natural building company MV Habitation – www.mvhabitation.com Recently they began work on their biggest project to date, which will be the largest and first public straw bale building in France â€“ 10,000 sf or 1,000 sm. Hereâ€™s the link for photos of the project //picasaweb.google.fr/julien.mussier Their part in the project is to do all the straw bale work and plaster the building inside and out with a lime/clay plaster using a plaster sprayer developed by Noe. The sprayer incorporates a pair of vertical shaft mixers. We didnâ€™t see it work, but Noe claims that unlike other sprayers, it will handle clay mixes that are fiber rich. 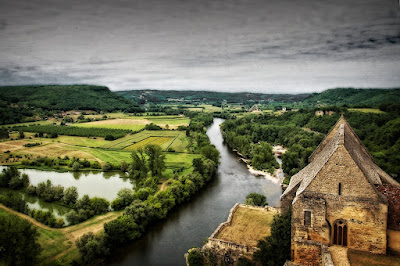 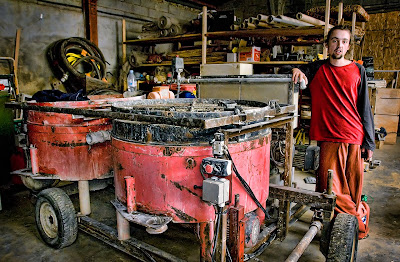 Noe Solsona with his plaster sprayer.

Along with several partners, Noe is also involved in a separate project working on a book about masonry stoves. One of those partners is named Vital, his last name escapes me at the moment, but he too was a great translator for us during our workshop. He added an extra French flair to the workshop looking like he had just stepped out of a Parisian coffee house. He was every bit his name, vibrant and determined to make sure I was organized and on track for the workshop. And as long as I’m talking about those who helped us, there was Cecilia from Tuscany, Italy who we met when we arrived in England at the beginning of our trip and found again at the French workshop. She traveled with us after the workshop, did some wild translation work using what French she knew, Italian, Spanish and a touch of English. She safely delivered us through the Paris metro to the train to London. 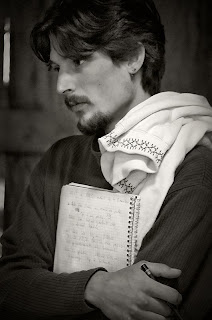 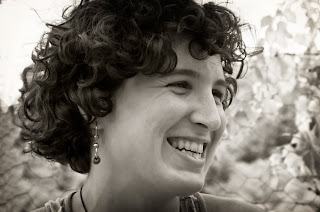 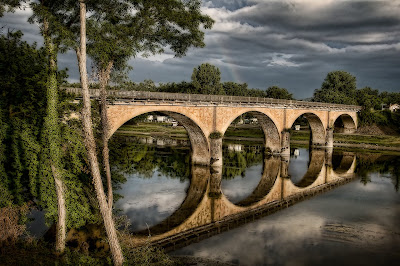 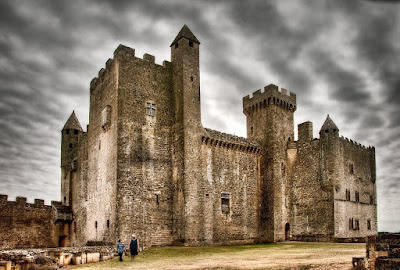 And with that we will leave France. Once again, thanks to Coralie, Andre and their kids for the care and kindness that they extended to us both at their home and during the long hours we spent together on the road. Next posts to this blog will cover our trips to Germany, Italy and Slovakia.