The Song and Dance of Mexico in Arizona

Once again we find ourselves in that time of year when a handful of individuals manage to spend a lot of other peopleâ€™s money telling the public why they should be elected to public office. It can be a depressing time to say the least. For the most part, they donâ€™t seem to tell you why they should be elected, but rather tell us stories about how bad and awful the person is they are running against. I honestly cannot remember when I heard any of them say anything about what they themselves were going to do. Seems like political campaigns have been reduced to little else but petty and juvenile bickering and bad-mouthing. This phenomena seems to be equally shared by all parties. To me, the whole process seems to have hit a new low. It appears that there are still a whole lot of people out there who are not happy with this countryâ€™s Constitution that I had thought guarantees diversity, civil rights, freedom of religion and speech, freedom of the press and that limits the powers of the states. It appears that these same people would prefer a return to the Articles of Confederacy that I thought we put to rest with the Civil War. Apparently the past lingers on.

Given the rather dismal picture I’ve painted and the serious lack of imagination and creativity we are witnessing in this country, I decided to write and tell you about something we recently did that was just a whole lot of fun, that was politically insignificant, that was really worth doing, that was more fun than working with clay and that brought a whole lot of enjoyment to an audience in Tucson. And that had a lot more appeal than voting in the upcoming election.

Last spring, while in Mexico (that place where it is not safe to go), we had the pleasure of watching a group of middle school and high school kids perform folkloric dances from northern Mexico. We were so taken by them that we couldnâ€™t wait to see them again. We posted several videos of them last month on this blog along with an announcement for a performance in Tucson, the one about which Iâ€™m going to write. I figured this was a perfect opportunity to say something positive and beautiful about Mexico in a time when it has received such negative press. In most people’s minds, Mexico equates with fear and paranoia. One other thing about this group, I should add that this is no ordinary school dance group. Their performances are exquisite to the level that they recently won third place in Mexico’s national competition for the second year in a row.

Mostly for selfish motives, we looked for an opportunity to get them up to Tucson. As it turned out, the city of Tucson holds this marvelous event called â€œTucson Meet Yourselfâ€ every October where the many different cultures of the city come together as performers, food vendors and merchants of various crafts. After a few conversations we were able to secure these kids a spot in the Saturday afternoon program. With that, our job began.

Our agenda for the weekend went something like this. First item was arranging the transportation of sixteen kids, including teacher and wife, to our place and then to Tucson, none of whom own vehicles. This turned out to be a bigger task than imagined. Next came providing sleeping accommodations at our place for the whole bunch, meals and the return trip to Mexico. And of course all the above includes finding the funding to make all of it happen. Iâ€™ll skip the details on how all that came about, suffice to say that we managed except for being a little short on the budgeting.

After a late arrival Friday night in the border city of Nogales, pizza from Little Caesars, we arrived Canelo at 11 pm, tucked them away for the night and got ready for next day. Iâ€™m going to let the following photos tell the story of the next two days. We have video footage and should Athena get around to editing some of it, weâ€™ll post it to this blog. For now, the photos will have to do and I do think they capture the spirit of their visit. 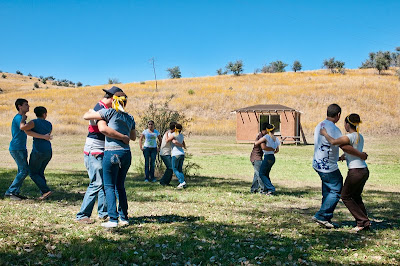 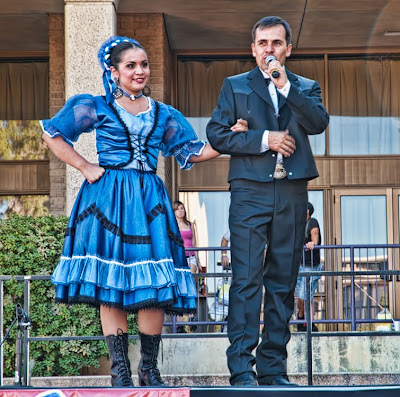 Much of the credit for the formation of this group and the quality of their performances goes to their teacher Nico Lizarraga who passionately invests an incredible amount of energy into the training of these kids. Consisting of students from the Rio Sonora valley’s middle school and high school, the dance group is known as “Xunutsi,” that in the language of the Opata indians, who once inhabited the area, means “people of the corn.” 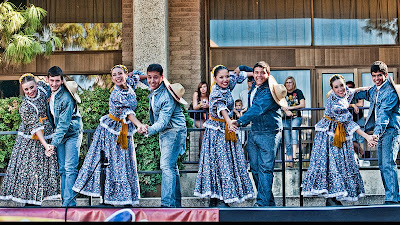 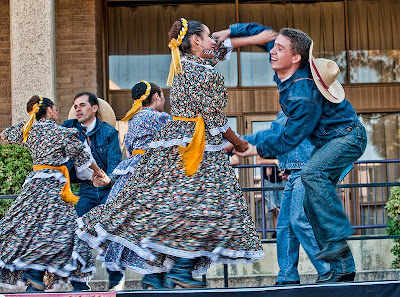 I can’t tell you the origins of all the dances that they perform, but they go through an amazing amount of costume changes for an hour’s performance. 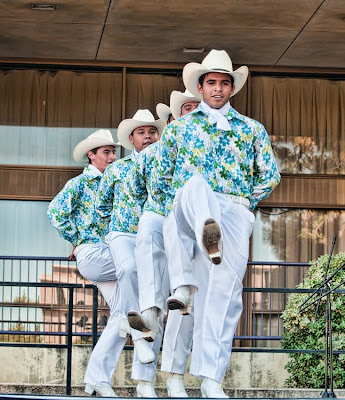 Can you tell you enough about the above dress that the dance is from the state of Nayarit. No event like this seems to be without some sort of crisis. As the kids arrived in Tucson they discovered that someone had left their cowboy hats on the bus that had brought them to Nogales. In a flurry, we called hat stores, friends trying to find a source of hats for their performance. Miracles sometimes happen and in this case, after many phone calls they got the cell no. for the leader of a dance group from Tucson who at that moment were performing during halftime at the University of Arizona football game. They agreed to rush the hats across town to the Tucson Meet Yourself stage as soon as they finished. The hats arrived so that the kids only had to do one dance without them. 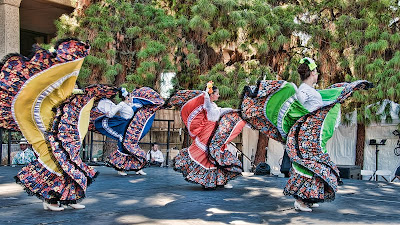 Women’s costumes from the Nayarit dance. 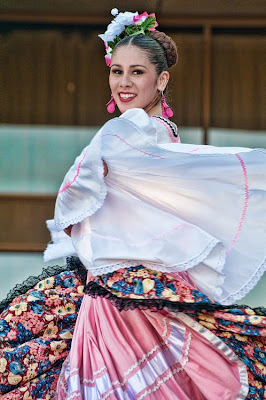 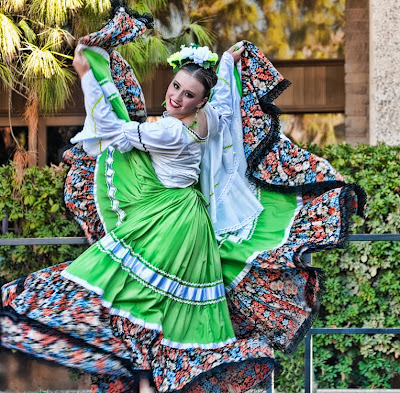 It was marvelous fun to photograph their performances. Subjects vary when it comes to photographic images, some more serious, others pensive or quiet, but the colors, movements and faces that these kids bring with them are nothing short of uplifting. 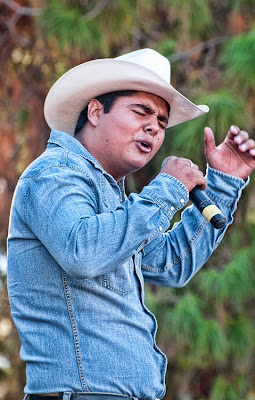 A wonderful addition to the group since the last time we saw them was Elmer, a kid with an unbelievable voice who performed a pair of what I would call romantic ballads that obviously had their roots in the ranchero and mariachi styles, but with a twist of Latin pop. They were originally sung by Mexican recording artists Alejandro Fernandez and Joan Sebastian. 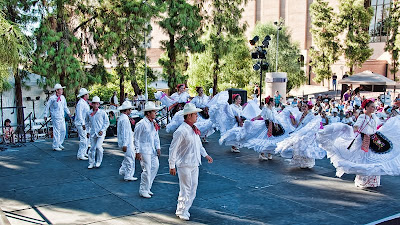 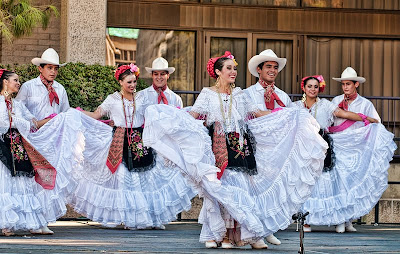 The white costumes above are from the area of Vera Cruz on the eastern coast of Mexico. 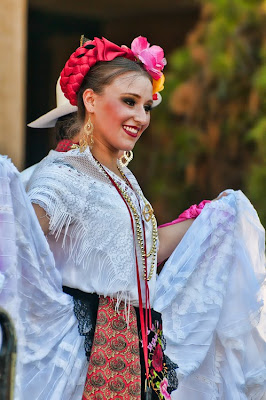 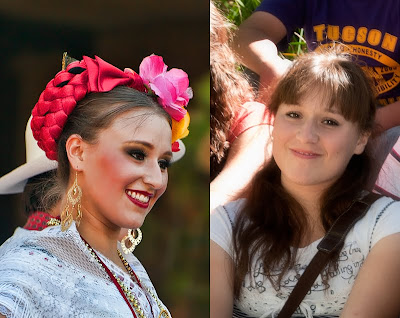 One of the most fascinating things we found about their performances was the transition from very adorable and beautiful kids into the presence and appearance they bring to the stage. Took me forever the following days to connect the before and after photos of the girls. 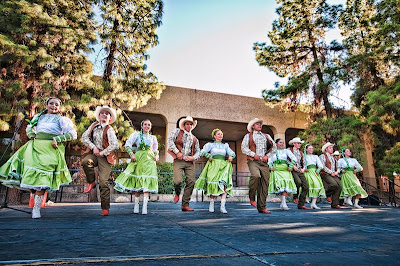 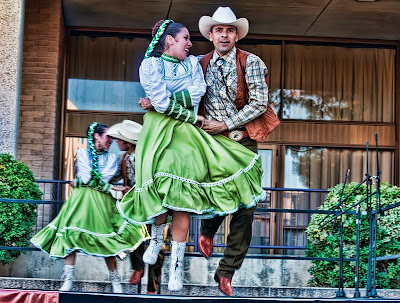 Any time that the cowboy hats come out, chances are that the dance is from the northern states of Chihuahua or Sonora. Those dances typically are more lively, fast and fun. 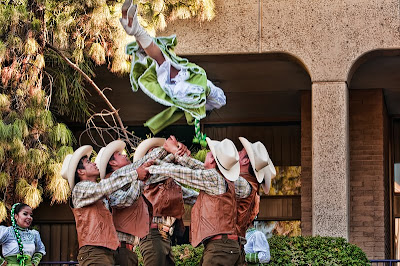 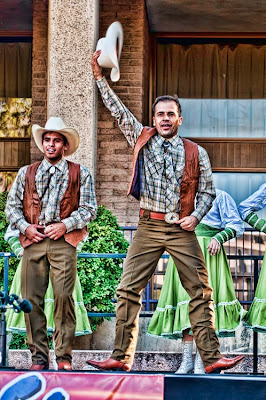 Teacher Nicolas, referred to affectionately by the students as “profe” (prn: profay), closing their performance. 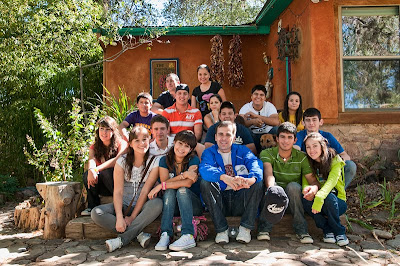 Sunday’s early departure dissolved into a day of fun and just being kids in Canelo.

More fun than taking the photos was watching them select the ones they wanted to have edited. This photo has Anna, the girl covering her face, embarrassed at her bloomers in the photo to the left. The group had never received any photos of themselves performing. The Rio Sonora area is not exactly backward, but it lacks some modern conveniences such as photo processing. We were able to edit and give them the digital files for over a hundred images to use as they need. 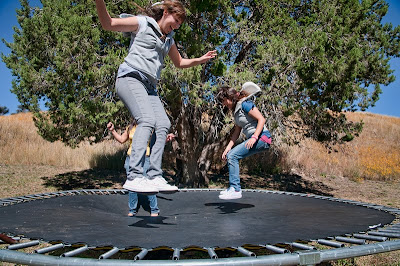 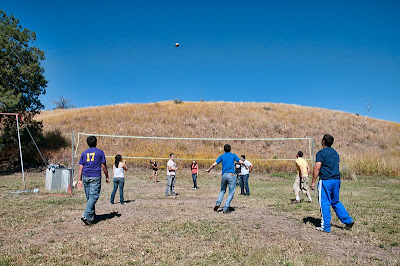 Volleyball, swimming in the creek, the trampoline and taking it easy took care of the day. We returned them back to Nogales in the early evening to a serenade provided courtesy of my passengers, Elmer and several of the girls, harmonizing an assortment of songs to the music of their cell phones.

Apparently they all had a great time, enough so that they want to come back in December to experience cold weather. Should that actually happen we are working to arrange several performances that would include Tucson, Patagonia and somewhere in southeastern Arizona.