This posting goes back to the month of June when we were in Slovakia for one of our European workshops. This will tell you a little bit about what we experienced there, a later post will cover the workshop. I’ve still got Germany to go as well as some other odds and ends, obviously those will come later. In that we’ve got a workshop starting today it will be a while before I post again, but for now, here’s Slovakia through our eyes. 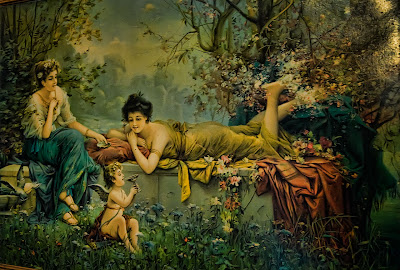 Arriving Bratislava, the capital of Slovakia, we found ourselves in a place that was clearly unlike anyplace we had been in Europe. It certainly bore no resemblance to the cosmopolitan surroundings we had encountered in Berlin. We didnâ€™t quite now what to expect, others had told us that it was somewhat of a backward country where we could expect a diet of bread, potatoes, fried cheese and beer. To be quite truthful, it looked a bit like Mexico. 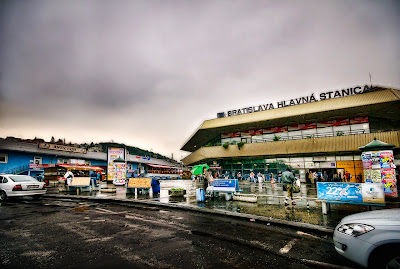 Greeting us at the train station was Bjorn Kerulfova, a Norwegian by birth, who was raised in Switzerland, painted us a very different picture of the country. For Bjorn, Slovakia was a place not limited by cumbersome tradition and a place of opportunity where many interesting things were happening. An industrial designer by trade, his company Createrra, www.createrra.sk, designs and builds houses according to the European passive house standards that require little or no heating or cooling. 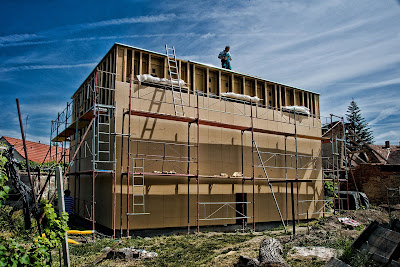 He works closely with his wife Zuzana, our hostess who is an architect and the director of a non profit organization called Artur, www.ozartur.sk 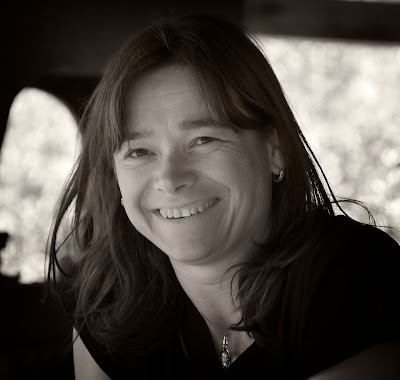 Their home, located in the village of Hruby Sur, is an old restored mill that has belonged to Zuzanaâ€™s family. Their house was nicely done, a very comfortable place to rest after the Denmark workshop. 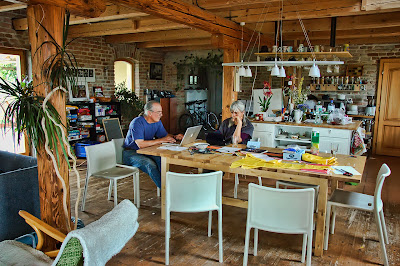 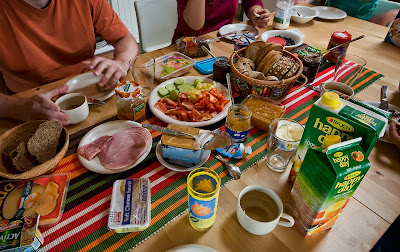 Typical of most European breakfasts we ate, but not in France – of course.

In their backyard was a newly built dome of clay bricks built several weeks earlier in a workshop with one of the gurus of German clay building, Professor Gernot Minke, who is mostly known for his book Earth Construction handbook. 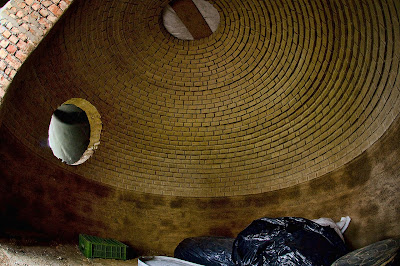 Like we have done in most places weâ€™ve worked we visited the old town of the nearest city, in this case that was Bratislava, the capital of Slovakia. Bratislava â€” historically Pozsony and Pressburg is the capital of the Slovak Republic with a population of about 429,000. Bratislava is in southwestern Slovakia on the banks of the Danube River. It borders both Austria and Hungary and was once the capital of the Kingdom of Hungary from 1536 to 1783. 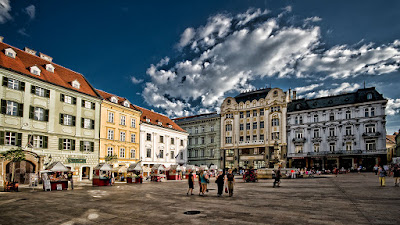 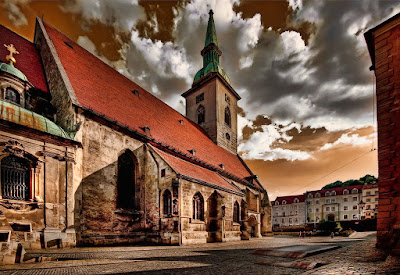 Before settling into work we took a day long sightseeing trip with Zuzana. In Slovakia, â€œday longâ€ means every bit that and more. The landscape was gorgeous, mountains, rivers and castle ruins that seemed to be everywhere. It was nothing short of magical. Zuzanaâ€™s laughter punctuated the drive over her constant confusion with her GPS. We were never lost, but hovered on the edge. 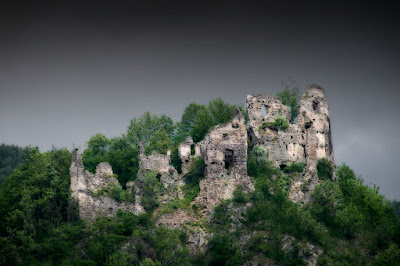 Our first stop was in the town of Zilina to see that which would be the most unusual straw bale project we have every seen. A group of young kids, at leas that is what Iâ€™d call them, got together and had built a rather tall straw bale structure under one of the ramps of a large highway/motorway using it as the roof. They were using it as a theatre and a place to hold various events. They had gotten permission from the mayor to build it who thought it was going to be something rather tiny, but was apparently greatly surprised when he arrived for the dedication. All the straw bales are covered with clay, the exterior has what I would call a Slovakian ventilated rainscreen assembly, plastic beer crates, donated by the beer company who sponsored the project. 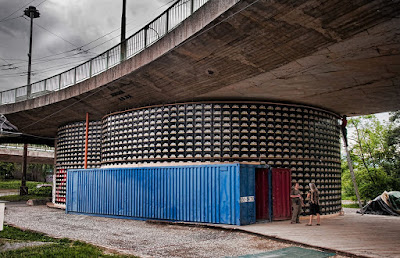 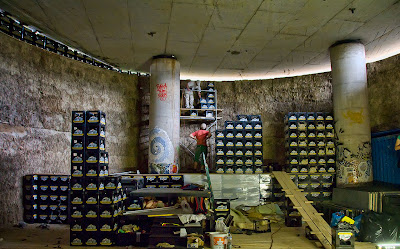 We stopped at a Slovakian pub for lunch where the food was nothing like that described by some of our other European friends. The flavors were surprisingly complex. There was creamed garlic soup served in a bowl of baked bread â€“ â€œCesnakova Polieka Bochniu.â€ There was also a cabbage soup with sausage, flavored with paprika much like the Mexicans would use chile powder â€“ â€œKapustnica Klobasou,â€ The flat potato bread, which was very much like a wheat flour tortilla, was served with delicately goose liver and called â€œLokse S Husacou Pecienkou.â€ We did finally see fried cheese which suited Kalin just fine. 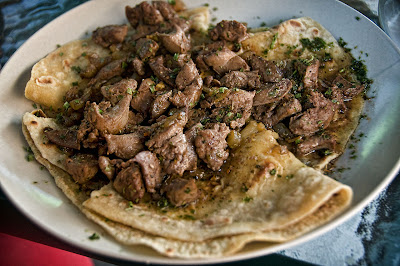 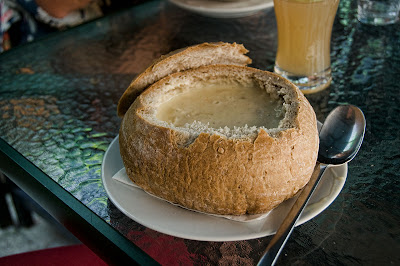 Our main destination was VlkolÃ­nec, a small village that dates back to the 14th century and has been listed as a UNESCO World Heritage site since 1993, and is one of ten Slovak villages that have been given the status of a village preserve. This status was granted because the village is an untouched and complex example of folk countryside architecture of the region of the Northern Carpathians. We knew about it because we had included photos of the village houses in our book â€œBuilt by Hand.â€ Our friend Yoshio Komatsu and his wife Eiko, the photographer for the book, had visited there many years before. Most houses in the village are log structures and consist of two to three rooms. The name is probably derived from the Slovak work for wolf. 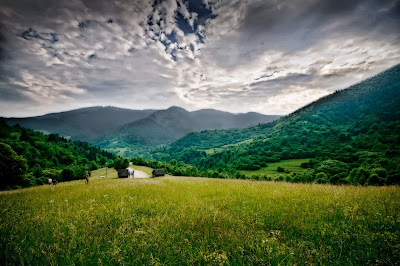 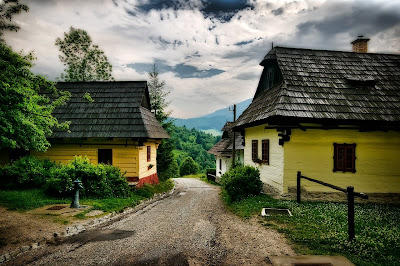 Having finished our work through the village, it had gotten late, about 8 PM and we had driven a long way to get there. Most people would have called it a day, but no Zuzana. She had one more place for us to visit, the town of Banska Stiavnica which she said we couldnâ€™t miss. She didnâ€™t give us any choice so off we went. And it turned out she was right.

It was originally a mining town for gold and silver and consequently the buildings in the town are beautiful. Like most of Europe itâ€™s old, walking the streets you immediately sense the antiquity. Kalin remarked that finally he was getting to see the kind of Europe that he liked. Some interesting facts are that King BÃ©la IV of Hungary made it a township in 1238 and the worldâ€™s first technical university devoted to Chemistry, Physics and Mineralogy was founded here in 1762. Like Vlkolinic it was also declared a Unesco World Heritage Site in 1993. 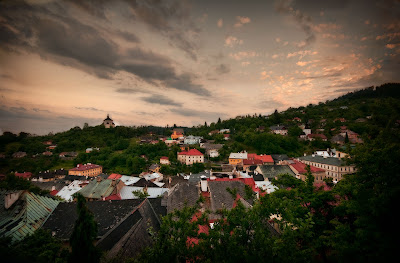 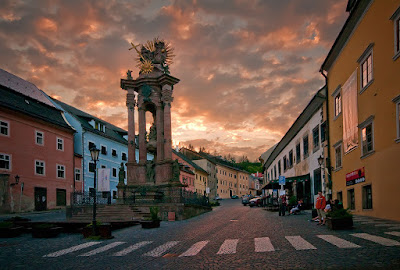 While driving the Slovakian countryside, it was interesting to note that many of the older traditional buildings were made of clay bricks, otherwise known as adobes. Many of them appear to have remained un-plastered for some time. 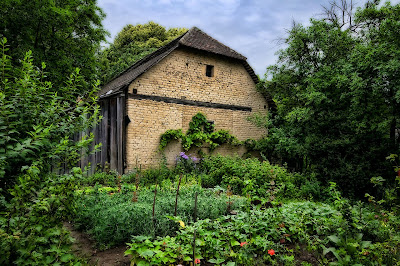 During our workshop we had a very special field trip to visit one of these older houses, what made it special was the old woman who had spent her life in it. I canâ€™t find her name at the moment, as I remember she was in her late 80s. 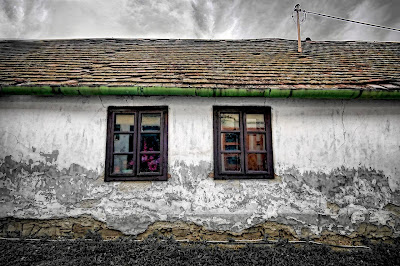 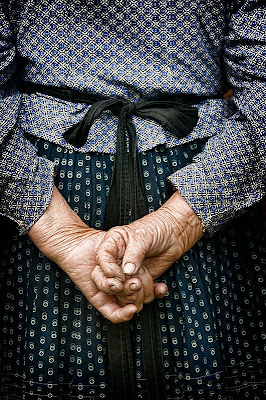 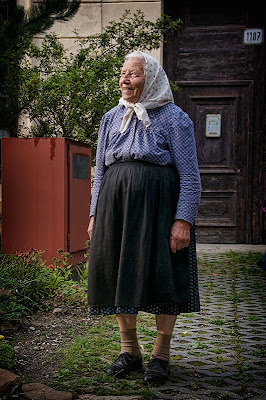 Contrasting the adobes the countryside was also dotted with remnants of the Soviet occupation of Slovakia. Once, nothing but a dull lifeless grey, the Slovakian people have given many of them a bright splash of color. 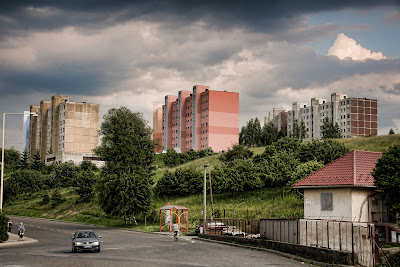 We also made a trip to a beautifully restored castle â€“ The Red Stone Castle. I never fully understood the historical details of that magnificent place, but here are a couple of photos that more than convey a sense of its grandeur. 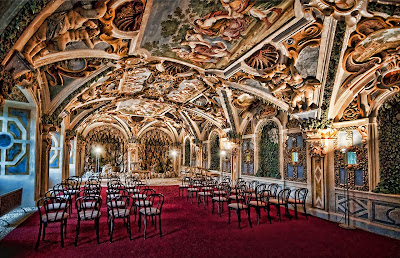 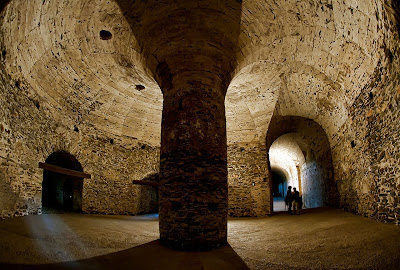 And even though the photos took place at the closing dinner of our workshop I thought it appropriate to include them here in that they really convey a sense of Slovakian culture. The restaurant we went to was in a beautiful old stone building complete with vaulted ceilings. We managed to capture the musicians and dancers who had been employed earlier by another group. I donâ€™t want to overdue the Mexican analogy I mentioned earlier in this post, but the music and dance had very strong ties to that of Mexico, especially what I had just seen in San Jose, CA at the Mariachi Festival. 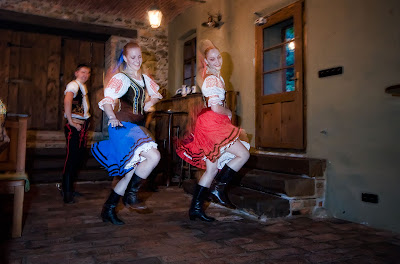 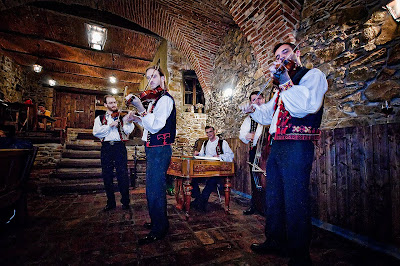