Our location for the Denmark workshop was about one hour north of the town Arhus, Denmark in the small village of Feldballe. Â 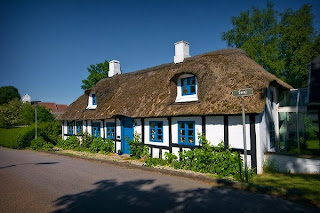 Thatched roof house in Feldballe.
The workshop itself was held at â€œFrilandâ€, a community that the residents describe as â€œworld famous in Denmark.â€ In short terms, Friland is an alternative community founded by a man named Steen Moeller. Â The word â€œFrilandâ€ could be quickly translated as â€œFree Land.â€ I tried to tell him that he had his names reversed, but he insisted the order was fine as is. Â Nonetheless, in Spanish he could still be my â€œtocayo,â€ or namesake. Â He looked about my age as well and seemed to be a longtime veteran of organic farming as well as building. Â While giving us a tour of Friland, Steen with his big smile and openhearted personality, described his basic premise in founding was to encourage simple inexpensive housing done without mortgages and no waste. Â Beyond that, there seemed to be few other restrictions on community members. Â Of course the dominant theme was being environmentally conscious in all that you do. Â I can’t tell you a great deal about the community, but if you would like to know more, you might contact Jo Morandin at jomorandin@livinghouses.net Â 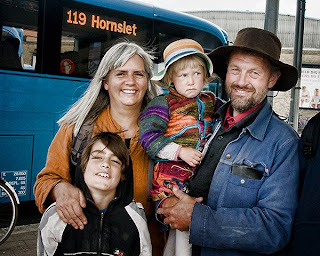 Steen Moellar with Athena and Kalin.
A walk through the community evokes many different images – at one moment you feel like you’re walking through the alternative subdivision of Village Homes in Davis, CA, the next moment might be some type of ecovillage and once in a while you find yourself taken back to the late 1960s communes of northern New Mexico with even a touch of the original â€œDrop City.â€ 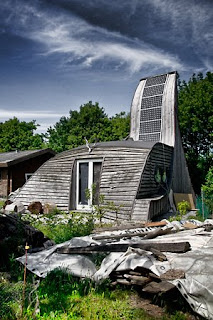 Tower House in Friland.
Our hosts for the workshop, Lars Kellar and his partner Jo Morandin, were super organizers. Â I’ll use the â€œamazingâ€ word, even though it’s somewhat trite and overused, but such was the case when describing how well organized everything was including the materials, scheduling and meals. Â However, the freewheeling French, Latins that they are, when feeling somewhat constrained by the precision of the workshop schedule, were quick to inform me that the Danish had watches, but they in turn had time. 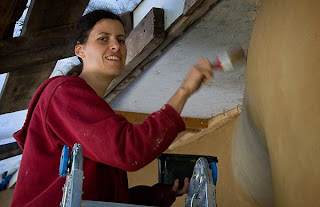 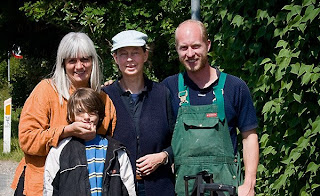 Lars Keller, Athena, Kalin and Sabina from Germany.
Lars and Jo were also the ones who coordinated and organized our Europe tour as a whole and linked them to the Grundtvig fund that in turn provided scholarships for many of the participants. Â It didn’t seem that the two of them missed a single detail.Â
For this particular workshop they brought together mostly people who were professionals whose work focused primarily on clay and other alternative materials. Â It was a talented group, quick to grasp whatever we taught. Â  We had participants from Denmark, Norway, Germany, Italy, France, Pakistan, Sweden, Australia, England, Slovakia and Latvia. Â Once again, as in Estonia, I think there was truly a sense of people being together without a strong sense of international division, at least until they spoke English with their own particular ethnic accent. Â It seems that when we arrive, the people that we meet are quietly watching to see whether or not we will fulfill the typical American stereotype. Â I’m not sure exactly what that is, but it is something that falls somewhere between George Bush, pickup trucks, John Wayne and a lack of overall sophistication. Â I think they do however, assume that we voted for Obama and now that he is in office, we get the benefit of the doubt and for the most part are given a reprieve. Â While working on some window preparations prior to plastering, Nicola of France did confess to me that the decisions I was making were â€œnot too badâ€ for an American. 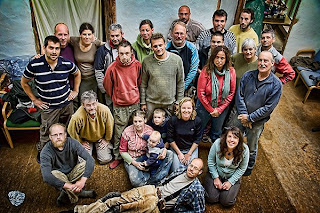 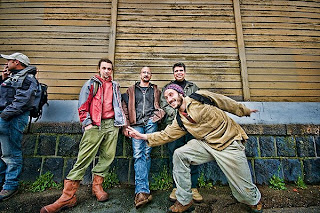 The French
We did arrive a week before the workshop started so there was ample time for any preparations that needed to be done and along with our first â€œleisure activities,â€ if you can call them that. Â These included my first bike ride in many years, a 12 km round trip to the sea through the Danish countryside to visit the ruins of an old castle. We also took a trip to the town of Ebeltoft that has a well-preserved section of the original old town. Â 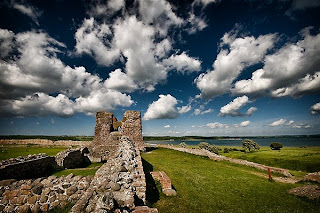 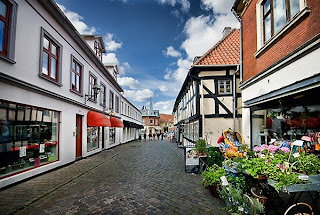 Afternoon walk in Ebeltoft.
One of our pre-workshop highlights was a visit from our friend Frank Andresen, a clay builder from Germany who has been residing in Ireland. Â We first met him when he was in the States in the mid 1990s, just about when we had just finished our first book The Straw Bale House. Â In the early 1980s Frank was one of those pioneers who began working on the restoration of old clay buildings in Germany while simultaneously developing and evolving new clay building and plastering methods. Â He was an invaluable teacher and guide for us back in those days when we ourselves were getting started with this type of work. Â Until visa problems no longer allowed him to visit the States, he frequently spent time with us in Canelo. Â In Denmark he began the workshop with a presentation of many different types of clay bricks he made along with a slideshow. Â Anyone wanting to contact him can reach him at – proclay@hotmail.com. 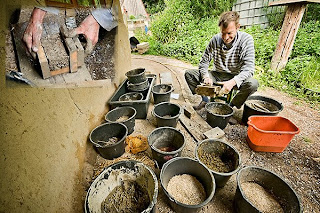 Frank Andresen making clay bricks.
Â Prior to the workshop we also paid a visit to Willelm Oskam, a Dutchman who is obsessed with clay building and splits his time between Denmark, Holland and projects in Africa – www.oskam.dk or info@oskam.dk. Â For now, let’s call him fascinating and brilliant, I’ll tell you more about him later in a separate post. 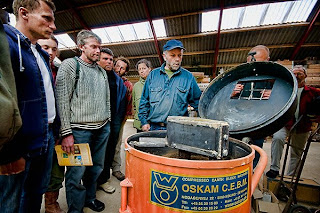 Willelm Oskham showing his mixing to workshop group.
We seem to be very lucky when it comes to the places we stay. Â Everywhere we go we have been most fortunate to have very gracious hosts. This was true of Denmark as well. Â We stayed with Lars Keller’s sister, Mette (pron – Medda} and her husband Rene and their three children, the twins Christian and Anna and 2 yr old Alfred. Â Their house in the older part of Feldballe was beautiful, comfortable with a large back yard of grass and 100-year old apple trees. Â The adjectives lovely, young, considerate and charming would be most appropriate. 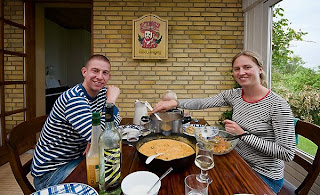