Getting ready to start another workshop in Slovakia this evening looking at a weather forecast that has rain predicted for each day of the week. Looks somewhat sunny today after rain all day yesterday, but it is very, very windy. Weâ€™ll see if the box of â€œHappy Dayâ€ Slovakian juice that Iâ€™m drinking lives up to its name. Itâ€™s got every fruit imaginable on the front of the package with a claim of 100% multivitamin. Anyhow, before getting too involved in Slovakia, letâ€™s catch up on the Denmark workshop.

The workshop that we held in Denmark was all focused on the exterior of Lars and Joâ€™s straw bale home. We ended up plastering all the exterior walls along with an earthen floor to the rear of the house under a porch. I should mention for those who have been reading this blog mostly for the travel and people content, that this post will have a lot of technical building info than in the past. So obviously you can skip that part if you like.

Before we began the actual workshop we had to do a fair amount of preparation and repair work around the windows. They had originally been done with a combination of loose straw, netting and clay plaster which left the plaster somewhat soft and spongy. Nonetheless they had held up in good condition for somewhere around 5 years. 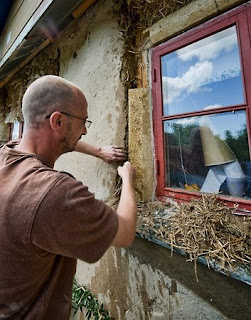 Nicolas from France attaching fiber board to window frame.

In fact, one thing that caught my attention was the good condition of the clay plaster that was on the house when considering the wet climate of Denmark. For a finish that was 5 years old it showed very little wear. And in case you didnâ€™t know, the weather can be very wet in Denmark. We had mostly sunny weather at the beginning of the week, but after a few days, that all changed. More rain than Iâ€™ve seen in some time followed, one day it rained hard for 24 hours straight. Very impressive, I have to say. With a mix of tarps and tents, the workshop continued without interruption. Temperatures were definitely on the cool side, ranging from the low 50s to high 50s F, somewhat like our winter at home. 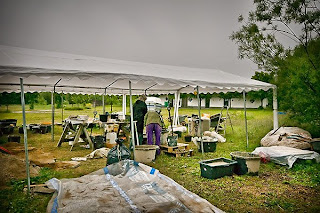 Tents for mixing underneath during rainy weather.

The mixing area for the plaster and floor materials almost did not resemble a building site especially one where clay is mixed. Rather it looked somewhat like the perfect kitchen. Donâ€™t know if Lars and Jo always work that way or were responding to my comments that processing and locating materials in Estonia was a tad bit difficult or perhaps the fact that most of those attending the workshop were professionals and they had to put on a good show. For now, I will go with the assumption that they always work that way. 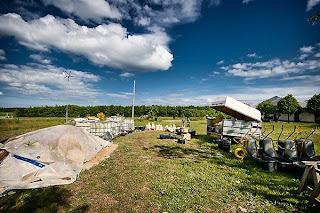 Whatever the case, it was impressive. 2 â€“ 1,000 liter containers of perfectly clean clay paste were at our disposal. They were acquired for little or no cost from a sand and gravel processing facility, the clay being that which remained after cleaning the other materials. 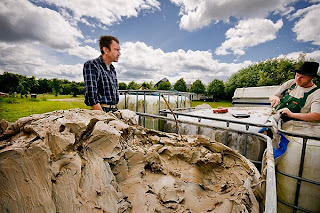 Bags containing three types of chopped fibers were available for use â€“ straw, flax and hemp. The sand was clean, well graded and sized to make mixing easy. Those were the basics and along with an adequate supply of pigments, bags of colored clays and assorted odds and ends. For mixing, there was an old bread mixer that looked somewhat questionable at first glance but proved to be pretty awesome when it came to mixing just about anything including mixes with a lot of fiber. Only limitation was that the quantity it could mix at one time was somewhat limited. Therefore, Athena kept her preferred method of mixing by hand that worked well to produce larger volumes of our thick, heavy fiber plaster mixes. 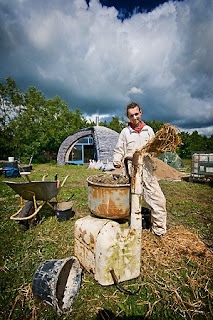 Noe from France with bread mixer.

There was also a German drill, the name I donâ€™t remember, but it was capable of even mixing 100-liter tubs of dry gravel, small stones and sand with no water. Never seen anything like it. I canâ€™t say enough good things about the black rubber buckets and tubs they have for mixing. For the most part we used the 75 and 100 liter tubs for the plaster mixes and smaller 12 liter buckets for a water, cleaning and proportioning ingredients. They appear to be indestructible and I would not hesitate a second to use them in place of our 5 gallon plastic buckets.

We used a variety of mixes on the walls around the house, trying to match mixes to weather exposure. Iâ€™m going to give you the recipes for the plasters that we used, but â€œpleaseâ€ keep in mind that all clays are different and these proportions will vary depending upon the qualities of the particular clay. Most every mix excluding finer mixes for carving and smooth finish coats we sieved or screened the sand through 1/8 inch or 3 mm screen. The clay was already in paste form. For the front and back walls that are protected under porches and needed no stabilization we used the following proportions. 1 clay, 3 sand, 1 straw, Â¼ hemp fiber for fun.

For the thick mix or as I call it, the rough coat, Athena likes the term â€œsculpting coatâ€ we used 1 clay, 1 sand, and 2 fiber (in this case, we used 1 hemp and 1 chopped straw.) This mix we used to fill out any low areas, around windows, to build up surfaces and for the basic mix over a willow structure that became shelves. It is typical of what we use over clay-slipped bale walls to fill them out. We also like to let this mix ferment and age, like the Japanese often do, which increases the workability as well as its resistance to weather. 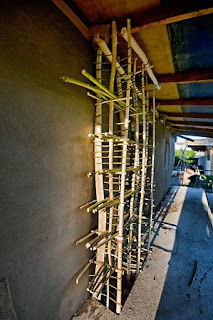 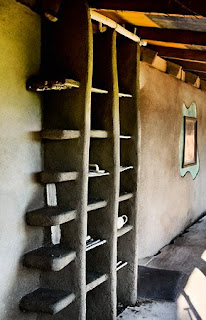 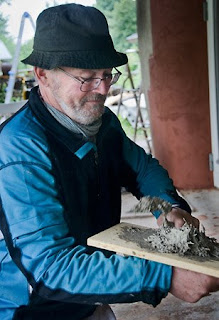 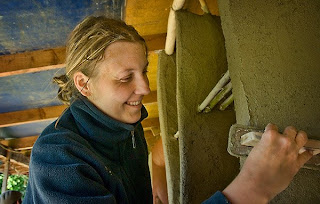 Carsten the Danish carpenter and Christina from Latvia who constructed the shelves.

For the exposed east wall, that gets a moderate amount of weather, we used a plaster that contained linseed oil and casein as a mild stabilizer. For this we used 2 yellow Danish clay, 3 sand and 2 chopped straw. The low ratio of clay to sand here was the result of the yellow clay being somewhat sandy and not pure clay. I will add here that this was only an experimental mix that will be observed over time by Lars and Jo. There was no time to test it, the only sure thing was that it will wear better than the same mix without the casein and linseed oil. To make the mix we determined that the combined quantity of clay, sand and fiber would be 60 liters. In a separate container we mixed a large batch of emulsion made from 12 liters of quark (non fat milk curds/cheese) with 3 liters of lime putty to make the casein glue and then drizzled in another 2 liters of linseed oil using the mixing drill to complete the mayonnaise like consistency. This made our linseed oil/quark emulsion and then we added 5 liters of this to every 60 liters of plaster. All these proportions were nothing more than a calculated guess. Possibly the ratio of oil to quark could be changed by using less oil. And it could be that less of the emulsion could be added to the plaster mix. Only further experimenting would tell. The only sure thing was that it made a beautiful mix to apply and finish. 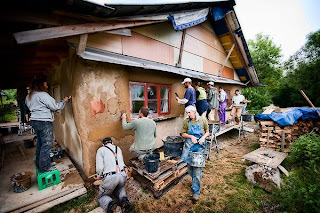 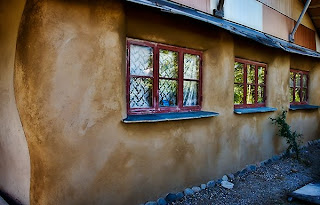 The east wall being plastered, finished east wall to the right.

Moving on to the west wall, that is the most exposed, we used a combination of lime and clay. This mix was 1 lime, 3 clay, 11 sand and 4 flax fibers. We used the flax because it was finer than the straw or hemp and therefore would not stick out on the surface of the finish. Again, the proportions of this could vary. The amount of lime mix could be increased to make a harder surface, but this plaster when dry seemed to be more than adequate in strength. After working with this mix, we probably would have added more sand to the mix to cut some of the â€œstickinessâ€ out which made it a little difficult to work. Thierry Soubrier of France â€“ thierry.soubrier@ftn_concept.com normally uses a richer lime mix (50% clay to 50% lime) in their clay-lime mixes. When they want the plaster to dry quicker they change the lime to be 30% hydraulic lime and 20% hydrated lime. This plaster was also frescoed a yellow color. This was a yellow pigment mixed with water and painted over a plaster that was set, but still damp. 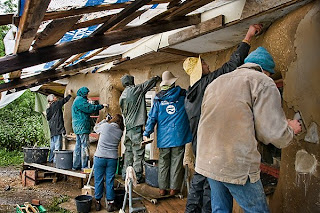 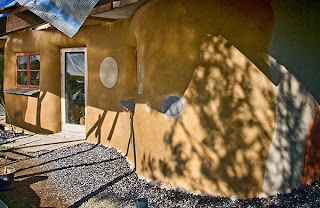 West wall being plastered in the rain, finished wall to the right.

The earth floor mix used on the rear porch was 1 clay, 5 sand, Â½ straw or flax fiber. We also did a Japanese style â€œTatakiâ€ floor to one side that is basically a mix of sandy clay soil, gravel, lime and magnesium chloride, which is the chemical form of â€œnigariâ€ that is used to make tofu.

Nicolas Prieur Bernuit of France â€“ nicolasprieur71@wanadoo.fr, who lived in Morocco once upon a time demonstrated tadelakt, everybody in Europe seems possessed by it at the moment, using the following mix â€“ 1 lime putty, 1 window screen sand and Â½ sand screened to 1/8 inch or 3 mm, powdered chalk and pigment for color. 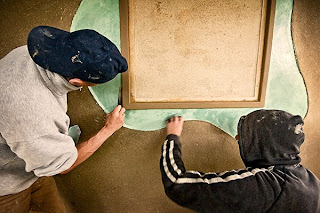 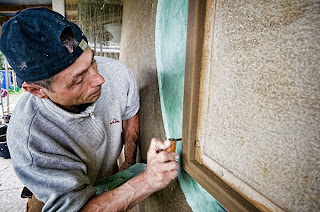 In addition to all the above we did a polished clay plaster sample, a clay molding around it. As always, a big highlight was Athenaâ€™s carving around one of their doors. 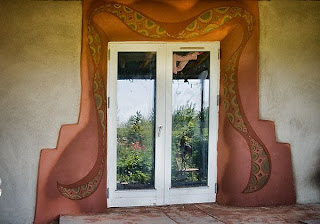 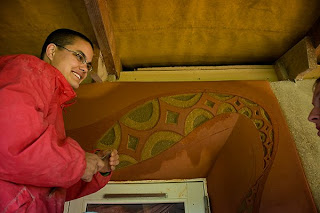 Finished plaster carving, Nora from Slovakia during the carving of the plaster.

I have more to tell about Denmark, but it will have to wait. On top of that there is our travel from Denmark through Germany to Slovakia. â€œMananaâ€ will be the word for today or should I say â€œnot todayâ€ because it is now time for the traditional Slovakian Sunday mid-day meal – â€œpecene bravcove maso s knedlami a kapustouâ€ that includes pork, steamed bread. sauerkraut and beer. 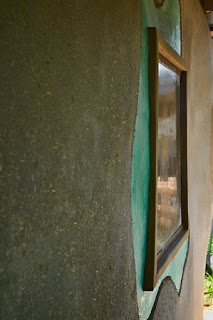 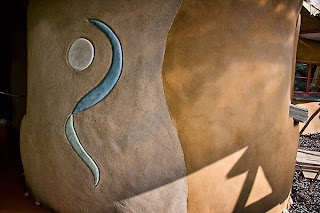